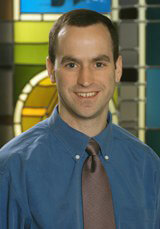 Mechanical engineering professor Jim Schmiedeler has been teaching at Notre Dame for almost 10 years. After graduating with his undergraduate degree from Notre Dame in 1996, he continued to study mechanical engineering at Ohio State University. His research and teaching focuses on quadruped robots. In particular, he studies the intersection between robotics and human biomechanics. Currently, he is part of a project working on spinal cord rehabilitation.

What role do you see robots playing in the future?

I have three children; my youngest is five. I have a nine-year-old daughter. I am absolutely convinced that my nine-year-old will learn to drive a car. I would admit that there is now a small percent chance that my five-year-old might not learn how to drive a car. These advances are typically made for efficiency gains … The classic type of work that robots do is work that is dirty, dangerous or dull. The idea in many cases is to relieve humans from drudgery and from tasks that are unsafe. I think as the capabilities of robots grow you will see more and more applications where they are doing work that is undesirable for humans.

On the belief that robots will take our jobs:

The robotics doomsday opinion is that things are moving much faster now and robots are replacing jobs … I personally don’t subscribe to the doomsday opinion that the sky is falling and the robots are taking all the jobs and there is no replacement. If I look at history, the efficiency gains we’ve had in previous scenarios that were similar have ultimately created benefits for humanity as a whole. I have not seen compelling evidence that the present circumstance with robotics is different. There is a possibility — I’ve been wrong before — but I don’t see the evidence.