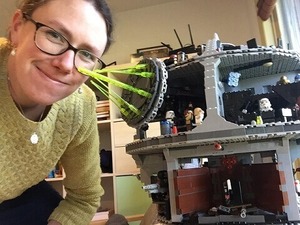 Meghan Sullivan is a professor of philosophy at Notre Dame. She has degrees from the University of Virginia and the University of Oxford, and she received her Ph.D. from Rutgers University. Her research interests include metaphysics and the philosophy of religion. Professor Sullivan teaches a popular introductory philosophy class for undergraduates called “God and the Good Life.”

On her research involving the philosophy of time:

What kind of impact does philosophy have on faith?

Growing your faith means wondering about what it is to have belief, who God is, and that requires asking yourself some philosophical questions. At a certain point, when you get confident, and this happened for me, I think you’re ready to start offering arguments for your views. It probably depends on what faith tradition you’re a part of, but for the Christian faith, there are a lot of really good arguments and a lot of good evidence. But at a certain point, at least in [Christianity], you’re not required to believe anything irrationally … St. Paul gives us a lot of advice on this front … I think your obligation as a philosopher is not to win every argument. Instead, it’s more about building up a rational theory for what you believe is the truth. Once you’ve built out your views and your arguments, people might not believe them, and that’s okay. That’s to be expected in religious faith because we know that there is a component of it that involves grace. At some point you just come to terms with the fact that you’ve done your job and, at a certain point, it’s not about winning arguments, it’s about having fit the pieces together in a way that you can live with.

What do you think makes philosophy important to everyone?

I think sometimes philosophers sell themselves short. They say that “you should take philosophy because you’ll learn how to argue well or write well.” [But] there are a lot of classes that teach you to reason and write well. I think what’s more important about philosophy is that it’s deeply practical in the sense that there are some questions we all have to get an answer to, and philosophy helps us find those answers. The questions of what is good in a life are paradigmatically philosophical questions. You can deal with those questions by yourself as they come up. But you would be better off if you have the resources from people who have been recognized across history as having had some of the best ideas … A good introductory philosophy sequence gives you the resources to think about these questions.