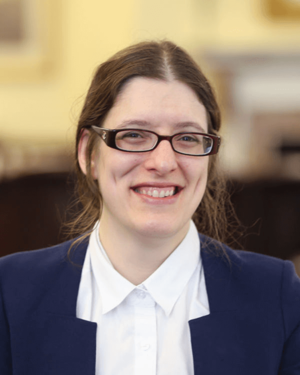 Hadas Elber-Aviram is an adjunct assistant professor at the university’s London Global Gateway. She has been working there for three years, over which she has taught the course London in the Literature of the Fantastic, which examines the intersection of the fantasy genre and the city of London. The subject matter of the course encapsulates but a segment of her professional interests. Elber-Aviram specializes in nineteenth and twentieth-century urban fiction, a literary genre that focuses on social change and the metropolis. Her monograph, “Fairy Tales of London: British Urban Fantasy, 1840 to the Present” charts the development of fantastical London literature and is scheduled for publication around Christmas 2020.

What is your role at the London Global Gateway?

I am an adjunct assistant professor at the University of Notre Dame's London Global Gateway. This is my third year teaching at the Gateway. For the past three years, I have been teaching a course in English Literature entitled London in the Literature of the Fantastic, which examines the intersection between the fantasy genre (widely considered) and the city of London as both a concrete, historically overdetermined location and a fluctuating imaginary space. The course analyses a diverse range of London-based fantasies from the nineteenth century to the present, and includes guided walks through London that follow the routes and key locations of the set texts, and a full-day excursion to the Warner Brothers Studio Tour, The Making of Harry Potter.

In Fall Semester 2020, I will be launching a new course, entitled Deciphering the City: The Urban Detective Story, which studies the Urban Detective Story as a genre uniquely attuned to the crime, policing, challenges, temptations and also pleasures and epiphanies of the modern metropolis. This new course incorporates a wide range of excursions and guided walks through London — our itinerary includes visits to the Sherlock Holmes Museum and The City of Police Museum, walks around the Victoria Embankment and Bloomsbury and attendance of the modern production of Agatha Christie's “Witness for the Prosecution in County Hall.” Fingers crossed that life returns to normal by then!

What is your area of research and how did you become interested in it?

I specialize in nineteenth and twentieth-century urban fiction, with a particular focus on (but not limited to) the urban fantastic. I have published on topics ranging from Dickens' influence on Mervyn Peake and China Miéville, to H. G. Wells' fantastical London, to the representation of vampires in science fiction, to the affiliations between urban archeology and urban fantasy. I was fascinated by fantasy literature and by London, and by the intersections between the two, since as far back as I can remember myself. I grew up on a steady diet of “Doctor Who” (reruns of the old series and fresh episodes of the new), “Harry Potter,” Neil Gaiman's “Neverwhere” and “Sandman.” Once I was accepted to a fully-funded PhD program at University College London, my obsession solidified into a career path.

Tell me about your most recent publication / work.

My monograph, "Fairy Tales of London: British Urban Fantasy, 1840 to the Present,” is scheduled for publication in Christmas 2020. This study argues for a coherent tradition of London-based urban fantasies spanning from the mid-nineteenth century to the present day. The book charts the development of fantastical London literature across the fictions of Charles Dickens, H. G. Wells, George Orwell, Mervyn Peake and China Miéville, examining their fascination with the materiality of the city, their belief in the fantasy genre as an idiom that can affect social change and their conviction that for good or ill, the future of humanity lies in the metropolis. This monograph contextualises its readings of a wide array of London-based fantasies within the aesthetic, ideological and political debates around the role of fantasy literature in British society. It transcribes and analyses hitherto unpublished manuscript material from the Mervyn Peake archive at the British Library and the H. G. Wells papers at the University of Illinois, Urbana-Champaign. Within these contexts and drawing on this new material, this book reads the growth and development of British urban fantasy as a complex, multifaceted dialogue with a rival pastoral tradition typified by John Ruskin, George MacDonald, J. R. R. Tolkien and C. S. Lewis. I have been working on this book more or less continuously for the past eight years, and I am very excited to see it approach publication!

How did you feel when you heard that the London program was being suspended and how did you start preparing for remote learning?

I had mixed feelings. On the one hand, I was profoundly sad to see my students leave and to know that I would not be seeing them again in person. On the other, I was deeply relieved by the thought that my students would be safe and sound with their loved ones, and well cared for. In the final analysis, while I am very sorry that their semester was cut short, there is no doubt that the students' health and safety is our foremost concern, above all else, and I am very glad that the decision was taken in time to send everyone back to their loved ones before travel was too severely disrupted.

The first thing I did to prepare for remote learning was to plan out the rest of the semester and to try and find remote equivalents, or substitutes, for in-person learning. Thus, in-person class discussions have relocated to online discussion forums and I pre-recorded each of my lectures in five to six videos of between ten to thirty minutes.

How quickly did you have to come up with your plan for the rest of the semester? Were professors given resources to help them with the transition to asynchronous learning?

I had been thinking about the transition to remote learning ahead of the official announcement of the program's suspension — we were made aware that this was a possibility some time in advance. Thus, I wasn't caught by surprise, and I had a reasonable amount of time to respond and adjust. Notre Dame's decision to suspend all classes for another week after spring break was absolutely the right one. I am very grateful for it — that extra week made a significant difference in the quality and robustness of my preparations, and I believe it also allowed my students more time to adjust to their own new circumstances. In this context, our staff at the Gateway and on campus have been absolutely brilliant. They worked tirelessly to ensure that my colleagues and I were given all the support that we needed, not only the technological tools to adapt our course to long-distance learning, but also the full training to do so, both in person and in workshops. The infinite patience, steadfast professionalism, and kind and unwavering support that were provided by them under these trying circumstances deserves our fullest acknowledgement and sincerest gratitude. Alice Tyrell, the director for academic programs, deserves a special mention here — she has been, and still is, an inspiration to us all throughout this transition. I have relied on her countless times, and I genuinely believe that I would not have managed to adjust my course without her indefatigable assistance and input.

How have you changed the structure of your course to be suited to remote learning?

My foremost concern was to enable my students to complete my course and receive credit for it and a final grade reflecting their work over the semester. Once the assessment was sorted, then I could dwell on the finer points of pedagogy and how best to translate the learning goals of my course to a remote-learning format. Overall, I believe most of my learning goals have been met by a mixture of pre-recorded lectures and online discussion forums, which enable the following: ensuring that the students are still on track with their reading of the set texts by asking them to make two substantial contributions to each forum about each set text; ensuring that the students are watching and listening to the videos that make up each lecture by asking them to make one substantial contribution to each forum about each lecture; keeping in touch with the students, and allowing the students to keep in touch with each other, throughout the rest of the semester; and ensuring that the students are doing all right under the circumstances — I read all of the students' forum posts diligently and respond to them as they are made, thereby ensuring that no one falls off the radar. If a student becomes inactive on the forums, I begin chasing after them rather like a mother hen!

How do you think asynchronous learning is going?

I think it's going reasonably well, touch wood, but you should probably ask my students! For my part, I can only express my admiration for them — my students have risen to the challenge of our new circumstances with remarkable grace and aplomb. They have been writing eloquent, insightful, penetrating and well-considered forum posts about our set texts, and have delivered beautifully put together and skillfully recorded presentations. I am very proud of them.

What has been the most difficult part of the transition to asynchronous learning?

For me, the issue is less about difficulty and more about the dimensions of experiential learning that were inevitably lost in this transition. No matter how ingenious and well-crafted, no calibre of remote learning can truly replace the experience and opportunities afforded by a semester abroad program in London. As a result of the program's suspension, my students missed the opportunity to embark on a walk across Covent Garden and Soho, where they would have seen the real-life inspirations for Diagon Alley and Knockturn Alley in the Harry Potter books, the alleyways traversed by the Yeti in “Doctor Who: Web of Fear” and the charming exterior and gothic churchyard of St Paul's Church, which feature prominently in Ben Aaronovitch's “Rivers of London” They missed the opportunity to speak to Ben Aaronovitch himself and to David Lloyd, the artist and co-creator of “V for Vendetta,” both of whom were scheduled to deliver guest sessions on my course. We are doing the best that we can under the circumstances, but there is not the slightest doubt in my mind that remote learning can never truly capture the same experience of studying abroad with London as our classroom.

Have there been any unexpected positives that have emerged from this circumstance?

The online forums have been a potent and powerful remote classroom. They have two advantages: One, the forums allow students who were hitherto reticent to shine. Students who were hitherto shy and withdrawn in in-person class discussions have been consistently flourishing in the forums and writing eloquent, detailed and full forum posts. Two, the forums have become a written archive of the students' insights, thoughts and interpretations of the set texts, and of my replies to their posts. In this respect, forums have a clear advantage over live in-class discussion, which is by its nature ephemeral and of the moment. The disadvantage of the forums, conversely, is that they lack the spontaneity of class discussion and “the magic of the classroom” — the discussions that emerge organically from a comment or a half-smile or a sudden thought that occurred to a student in the moment. It is a trade-off.

(Photo by University of Notre Dame [USA] in England)