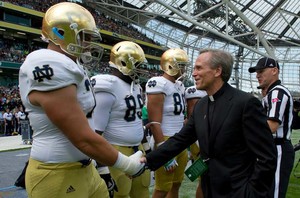 Not often will the head of a university publish an article in a nationally syndicated newspaper questioning the actions of an association of which it is a member. But Notre Dame President Reverend John I. Jenkins, C.S.C. did just that, and it has sparked an ongoing national conversation.

Jenkins wrote an opinion piece this September in the Wall Street Journal entitled “The NCAA Isn’t a Moral Arbiter — Nor Should It Be.” He questioned the National Collegiate Athletic Association’s decision to move seven championship games from North Carolina in response to the state’s House Bill 2 (H.B. 2), which restricts the use of public restrooms to a person’s biological sex, rather than gender identity.

The article has sparked reaction from many different groups, including a notably critical Observer Viewpoint from the Notre Dame Progressive Faculty/Staff Alliance.

Paul Browne, university vice president for public affairs and communications, says the president also received positive feedback. “In addition to the letter published by the Observer, there were three favorable letters published in the print editions of the Wall Street Journal and a dozen or more comments — mainly favorable — published on the Journal’s website,” he says. “Also, an editorial in the Deseret Morning News (Salt Lake City), and reprinted in Athletic Business Magazine, commented favorably, saying, ‘Jenkins is correct to caution the NCAA against joining an emerging social culture that increasingly bullies and silences unpopular political opponents rather than engaging them intellectually.’”

Jenkins argued primarily that the NCAA abused its power by taking action without first consulting its member schools, which generate so much of the revenue that in turn gives the NCAA its economic power.

“The role of such associations is to foster athletic competition that is fair and serves the well-being of student-athletes,” wrote Jenkins. “There is plenty of work for them to do in that sphere without assuming the role of spokesperson for their members on contentious political and social issues.”

Browne reaffirmed Jenkins’ point about separation of powers. “Universities themselves have the critical role in society of fostering reflection, discussion and informed debate on contentious topics and, as appropriate, taking action,” said Browne. This role should not be usurped by nor delegated to their athletic associations.”

The letter from the Progressive Faculty/Staff Alliance, collectively authored in early October by 47 university employees, expressed disappointment with his op-ed. The faculty also explain in the letter that they find Jenkins’ comments about the NCAA’s role as a moral arbiter “deeply problematic and inconsistent with the values of our university.” They believe that every organization has a “moral obligation” to speak out in the face of discrimination. They applaud the NCAA for making a stand, when many other powerful institutions, such as Notre Dame, have not.

Joseph A. Buttigieg, the William R. Kenan Jr. Professor of English, was one of the signatories of the letter. He explained that there there existed an email list among many of the more “progressive” faculty members where they regularly shared and discussed topics. Someone shared a link to Jenkins’ article, there was a general consensus that it was problematic, and within a few days, a letter was drafted.

Buttigieg emphasized that the purpose of the letter was to be a “courteous exchange on a rather controversial subject…to disagree without creating any bitterness.” The faculty also felt it would be best for their response to be public, as they wanted to respectfully show that there were members of the Notre Dame community that did not align with Jenkins’ opinion while keeping it within the university — hence its publishing in the Observer.

Buttigieg also reiterated that Jenkins has always spoken of the importance of tolerance and respectful disagreement. Because of this, Buttigieg stated that, to him, “the article seemed out of the norm.” Additionally, according to Buttigieg and confirmed by other faculty signatories, Jenkins has in fact reached out to members of the faculty who signed the letter, asking to meet personally and discuss the issue in more detail.

Buttigieg was eager to elaborate when asked why he personally chose to sign the letter.

“I signed it, firstly, because I think that the whole so-called ‘bathroom issue’ is a red herring,” said Buttigieg. “My first critique and the reason I wanted, from the beginning, to respond was that [this] was a smoke screen… that the real problem was the rights of gays, lesbians, etc. Secondly, I thought, in fact, organizations like the NCAA & ACC, being bodies connected to universities, which should be on the forefront for promoting equality and fairness, have a role in this conversation, and were being true to their moral principles. And thirdly, I think it is good for a university to have a dissent expressed openly, but with the utmost respect, and I think when you do that, the outcome is more likely to be more beneficial to the whole community, rather than if it became a refutation.”

Jenkins’ article cited 19th-century Catholic cardinal and theologian John Henry Newman, who in “The Idea of a University” described colleges’ responsibility to intellectually advance public dialogue. Jenkins said: “Universities, [Newman] believed, were for purifying the national debate by being places of reflection and deliberative, informed discussion. He wrote of ‘supplying the true principles to popular enthusiasm and fixed aims to popular aspiration,’ and ‘giving enlargement and sobriety to the ideas of the age.’”