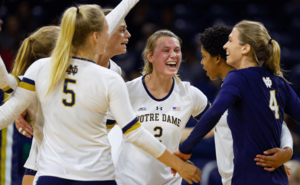 With each fall comes the renewal of Notre Dame’s campus with fresh faces, places and enthusiasm. The 2018 Notre Dame women’s volleyball team also got an update with a new squad and first-year head coach Mike Johnson.

In the first games of the season, the Irish hosted the Golden Dome Invitational in Purcell Pavilion. Returners such as junior outside hitter Jemma Yeadon, senior libero Ryann DeJarld and senior outside hitter Rebecca Nunge had high expectations in leadership roles.

In their next match against Toledo, the Irish maintained their energy and dominated the Rockets, sweeping the three sets. Junior Lauren Woodard tallied nine kills and four digs, and DeJarld added 20 digs. Nunez finished with 25 assists and zero errors, setting the Irish up for the invitational championship against Northern Kentucky.

In the championship match against the Norse, Notre Dame led early on with kills from Morningstar and Niego to take the first set 25-17. Despite their quick victory in the first set, the Irish fell behind and trailed 24-14. Notre Dame rallied to a dramatic 28-26 victory behind consecutive points from Nunez and freshman right-side hitter Sydney Bent.

The comeback in the second set marked a turning point in Notre Dame’s momentum. Early kills in the third set from Bent, Nunge and Yeadon set the Irish up for a quick and confident victory over the Norse, as the Irish won the set 25-14 and held the Norse to a 0.045 hitting percentage.

“The main message I wanted to send after was that I really liked the way we battled back,” Johnson said. “To come back and win that and then take them out 25-14, I like what it says about our character. I like what it says about our fight. I think it shows we believe and we’re starting to form the identity of a team that’s pretty tough.”
The Irish will hit the road later this week, taking on Michigan in Ann Arbor this Friday.