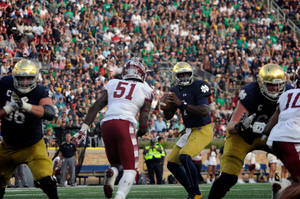 That was how the 2017 season started for the Irish.

The Fighting Irish football team kicked off their season with a thrilling 49-16 win over Temple Owls. Following a disappointing 4-8 season, Sept. 2 stood as a hopeful entry into the new campaign, answering doubts about last year’s lacking defensive pressure and raising expectations for the new quarterback, Brandon Wimbush.

The Irish got off to a lightning fast start. After the kickoff, Wimbush fired a 33-yard pass to wide receiver Equanimeous St. Brown. The very next play, Josh Adams scored the quickest season-opening touchdown for the Irish in 24 years.

The rising quarterback continued to build momentum, landing two more touchdowns in the first quarter with an 8-yard rush and a 12-yard connection with tight end Nic Weishar. Temple kicker Austin Jones hit a 36-yard field goal to put three points on the board for the Owls.

Early in the second quarter, Wimbush found St. Brown in the endzone after another steady drive, putting the Irish up to a 28-3 lead. The offense cooled off following the fourth Irish touchdown. Temple answered with a touchdown pass from quarterback Logan Marchi to receiver Keith Kirkwood.

Near the end of the third quarter, sophomore running back Tony Jones Jr. woke up the dormant offense with a 7-yard rushing touchdown.

Notre Dame continued to score points in the fourth quarter. After another Owl touchdown, Josh Adams and Dexter Williams each ran for a touchdown to seal the 49-16 victory for the Irish.

The Irish offense was dominant, especially in the rushing game. Adams finished with 161 yards on 19 carries with Dexter Williams following suit with 124 yards on six carries. Wimbush completed 17 of 30 passes for 184 yards and ran for 106 yards on 12 carries. Despite throwing an interception, the junior quarterback bounced back quickly and marked a promising first career start after redshirting last season.

The defense played respectably and recorded 11 tackles for loss, three sacks and a forced fumble in the fourth quarter. Sophomore defensive end Daelin Hayes came out with a sack and four total tackles.

The game and the win put new faith in the Irish nation. But it was not a perfect game. Apart from the somewhat-static offense and Wimbush’s interception, Justin Yoon missed a pair of long field-goal attempts. Yoon missed four attempts total in the previous season.

The Irish broke into the top-25 at No. 24 after the season opener. Heading into the weekend, Irish fans weren’t sure what to expect from the 2017 football team and many were afraid to get their hopes up after the distressing debacle from the previous year.

Following the win, the crowd left the stadium optimistic and a little overwhelmed: It seemed too good to be true. With a new coaching crew and the hype of the monstrous video board, Irish hopes were soaring. After all, it was Saturday night in South Bend, and all that mattered was that it featured a big Irish win to open the season.

“When you can exhibit some of the perseverance and the grit that we showed that is needed to have a successful season, that’s a good day for me.”  - Coach Brian Kelly