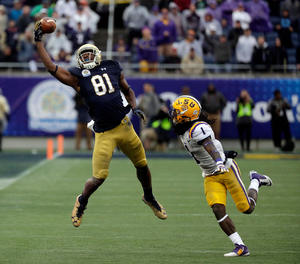 Player of the Game: Miles Boykin

On Jan. 1, Notre Dame entered the Citrus Bowl seeking to close out their season with win number 10. The Irish “hadn’t won a New Year’s game in, like, 752 years,” head coach Brian Kelly quipped after the game, and the formidable LSU Tigers threatened to make it 753.

Trouble clouded Notre Dame’s trip to Orlando before the game even began, with injury and discipline issues preventing three of the top four receiving targets from seeing the field. From the beginning, the Irish struggled to find a rhythm on offense, with nothing to show for their first five possessions. Junior quarterback Brandon Wimbush was just 3 for 8, and sophomore quarterback Ian Book replaced him for the sixth drive. As the first half wound down, junior kicker Justin Yoon finally put the Irish on the board with a 46-yard field goal.

Luckily for the Irish, LSU faced similar problems. It seemed that the Tigers would find the end zone first, but a spectacular goal-line stand by the Notre Dame defense forced a field goal try that sailed wide of the uprights.

“We fought for every inch,” Kelly said of his defense after the game. “And, quite frankly, it became a game of inches down there where we were able to hold them to the field goals. And that was the difference in the game.” Junior linebacker Te’von Coney was a particular force to be reckoned with, as he racked up 17 tackles. He finished the season with 116, the most since Manti Te’o in 2011.

Thanks to another missed field goal, the Tigers failed to put any points on the board in the first half. On a surprisingly cold and wet Florida afternoon, Notre Dame held a slim 3-0 lead entering the locker room.

The end zones were finally utilized when LSU opened the second half with a touchdown. Momentum further shifted in the Tigers’ favor when Book was picked off in the red zone. As it had all season, the Irish defense responded powerfully, forcing a three-and-out. Yoon took advantage of the possession, hitting a 49-yard field goal that was his longest of the season.

The game continued to heat up as the fourth quarter arrived. LSU put another touchdown on the board, stretching their lead to 14-6. Needing a swift response, the Irish offense turned to some unfamiliar weapons.

Still needing two points to match LSU’s 14, Notre Dame opted for a two-point conversion. Barreling through a pile of players, junior running back Josh Adams was marked down short of the goal line. However, after an infuriated response by Kelly and a look at the video review, the call was overturned. Try was good, two points Irish, tie game.

The Tigers would march down the field, burning clock and Irish timeouts, before hitting a go-ahead field goal. Camping World Stadium erupted with purple and yellow celebration, daring Notre Dame to respond.

With 123 seconds to construct a game-winning drive, Ian Book needed only 35. He sought Boykin streaking down the right sideline in tight coverage, and lofted the ball to his outside shoulder. In one of the most spectacular plays in recent Irish history, Boykin extended his right arm and used just one hand to reel in the football, then proceeded to make one defender miss, slip another and juke the first for a second time. As he raced into the end zone for a 55-yard touchdown, the Irish contingent went berserk. One final stand by the defense sealed the game, and Notre Dame emerged victorious by the final score of 21-17.

Miles Boykin was awarded the Citrus Bowl Most Valuable Player award in a ceremony following the game, a scenario that Kelly claimed he foresaw.

“Miles over here knows the story,” he recounted postgame. “We were in practice and … I said, ‘Miles, you’re going to win the MVP trophy,” and he looked at me like I had two heads. But I felt like he had a chance.”

When asked about the accuracy of Kelly’s statement, Boykin confirmed the story. “Yeah, we were warming up … and then I ran past him, he said, ‘Miles, you are going to win MVP.’ And I was just kind of like, ‘All right. That’s a good way to start off practice.’ But then as the game plan got closer and closer and closer, you know, I saw that I had opportunities to make big plays and big moments. And when that day came — you know, I really had a dream about winning the MVP. But I mean, when that day came today, I just had to make plays.”

As the 10-win season concluded, Kelly emphasized how well his players exemplified their year-long mission of restoring the Notre Dame football tradition. “Play for championships. Graduate our players. Work on traits of excellence on a day-to-day basis. Work on their total preparation,” he listed. “So they know what it means to be a Notre Dame football player and they went out and they showed that this year.”

“We have to fight for every inch. All year, this club has dedicated themselves to that fact that they had to work for everything that they got ... They just had to keep fighting till the very end, and that’s what they did.” - Coach Brian Kelly