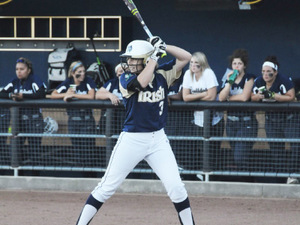 The No. 22 Irish softball team will face seven teams ranked in the top 25 this season, including No. 7 UCLA. Last year, UCLA defeated Notre Dame in the NCAA Los Angeles Regional Finals. This year, the Irish will face the Bruins in the second game of the season, in Los Angeles, Calif.

According to senior team captain infielder Jenna Simon, the hype of the UCLA game doesn’t affect the Irish.

“We go into each game we play with the mindset that we will win; the only thing that changes each game is the color of the uniform,” Simon says.

The Irish are not scheduled to play at home until about halfway through the season. Simon said that this only works in Notre Dame’s favor.

“When we come back to play at home, we have a swagger and confidence because we are on our home field. … We learn to win on the road which helps us to succeed in conference away games and in the NCAA tournament,” Simon says, adding that one of the team’s goals this season is to be undefeated at home.

Notre Dame boasts a roster evenly spread among grade levels, which, Simon says, “keeps the team dynamic steady.” The Irish have 13 returning players, one of which is senior Katey Haus. Haus returns to the infield this season, also looking to make a repeat impact as Notre Dame’s go-to cleanup batter. Haus was named to the 2014 NFCA Mid-Atlantic All-Region Second Team and boasted a .333 batting average with 55 hits last season. She says that having an evenly balanced team is an advantage for the Irish, especially when preparing for big-time games like UCLA.

“We have a lot of returners, and I think that has given the team a lot of confidence as we’ve been preparing for the season,” Haus says. “Our team has some of the best team chemistry I have ever experienced. We all know that every class can contribute on the field, which is one of our biggest strengths.”

This type of team allows for younger players to make an early impact, and return each season to build on their success. One such player is 2014 ACC Freshman of the Year sophomore outfielder Karley Wester. Wester looks to repeat an impressive rookie season, but says that it won’t be easy.

“Other teams aren’t going to hand opportunities for me to get on base, which is primarily my game,” she says.

Last season, Wester was named a top three finalist for the NFCA Division I National Freshman of the Year, but her goals for this season are all about the team.

“My personal goal is to help lead this team to a place it’s never been: the Women’s College World Series,” she says. “Personal records and awards are nice, but in the end, I would much rather be in Oklahoma City holding that national championship trophy with my whole team.”

The Irish will return to the ACC conference and look to claim a regional title and make their mark on the NCAA tournament. They kick off the season Feb. 6 against Utah in the SoCal Collegiate Classic and play on the road until returning to South Bend on March 18 to take on Cleveland State. The ACC Championship begins May 7, and NCAA Regionals begin the next week on May 15. If the Irish have their way, they’ll be standing on the diamond in Oklahoma City on May 28.