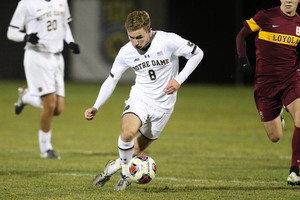 In a hard-fought, third-round NCAA tournament matchup on November 27, the Irish men’s soccer team lost 3-1 over the Thanksgiving weekend at Louisville. That match was Louisville’s second win over Notre Dame this year; in September, the Cardinals handed the then-top-ranked Irish their first loss of the season. Louisville joins four other ACC squads in the national quarterfinals.

Louisville scored first in the 16th minute when striker Mohamed Thiaw punched in his own rebound after a shot off the crossbar. Notre Dame junior striker and leading scorer Jon Gallagher’s attempt from inside the 18-yard box three minutes later was saved. Sophomores Thomas Ueland and Sean Dedrick’s shots late in the first half were wide right and saved inside the box, respectively.

Gallagher added the equalizer in the 54th minute off an assist from junior forward Jeffrey Farina. It would be the Irish’s only goal of the game, however, as shots from senior Brandon Aubrey and freshman reserve Jack Casey proved unsuccessful. Louisville’s Tate Schmitt headed in a goal at the 71st minute, breaking the 1-1 tie and cementing the Cardinals’ lead. Cherif Dieye then came off the bench for Louisville to add an insurance goal with six seconds remaining in the match to seal the win.

The 13-seed Irish finished their season with a 17-12-2 record while 4-seed Louisville advanced to 14-5-2. Gallagher greatly improved on his team-leading 9-goal 2015 campaign, finishing with an ACC-leading 14 goals and earning ACC Player of the Year honors.

The Notre Dame women’s season concluded Nov. 11 in the first round of the NCAA tournament as the second-seeded Irish fell to Southern Illinois University Edwardsville (SIUE). The ACC champion Irish squad was unable to score in regulation or overtime despite a dominant performance, and SIUE won in a penalty shootout for a stunning upset.  Two overtimes and 110 total minutes were played until penalty kicks went underway.

It was a drawn-out and defense-dominated match. SIUE goalkeeper Juli Rossi was the player of the game, saving eight shots in a shutout performance and two in penalty kicks. Notre Dame outshot SIUE 21-3 and 8-2 on goal, but was unable to convert. Notre Dame senior goalkeeper Kaela Little also recorded a shutout with two saves and one in PKs.

Juniors Meghan Doyle and Karin Muya, freshman Jennifer Westendorf and senior Sandra Yu all recorded shots on goal. The Irish attack came in flurries: They rattled off three shots in the 17th minute and five shots in the second overtime, but none were true.

The first two PKs were made by junior Taylor Klawunder and senior Kaleigh Olmstead, matched by Cory Levels and Peyton Roehnelt of SIUE.  Rossi then saved Notre Dame’s next shot, and SIUE’s Becca Jostes scored when her shot dribbled through after being initially stopped by Little. Senior Emily Geyer’s shot was successful for the Irish, and Little saved the ensuing try by SIUE. Junior Ginny McGowan tallied a make for the Irish, and SIUE’s Avery Anderson did the same, bringing the score to 4-4. After a Notre Dame miss, SIUE’s Mariah Vollmer hit the game winner.

The Irish finish their season 13-3-5 in their second year under head coach Theresa Romagnolo.  They were the first team in program history to win an ACC title, and senior forward Kaleigh Olmsted was named first-team all-ACC.