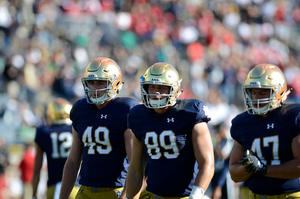 Eager for a win at home following the heartbreaking 20-19 loss versus Georgia three weeks prior, the No. 22 Notre Dame Fighting Irish continued their momentum with a decisive win over the visiting Miami (OH) RedHawks. The Irish dominated on both sides of the football, with over 300 yards rushing and two forced turnovers on defense.

Notre Dame had a dynamic first half, scoring 28 points in the first quarter — the most scored in a quarter since 2005 — and 17 in the second. Although running back Josh Adams sat out the second half of the previous game against Michigan State, Adams was an invaluable player for the Irish offense. Within the first five minutes, the Irish were up 14-0: Adams ran 73 yards for a touchdown on the second play of the game, and quarterback Brandon Wimbush scored a 1-yard rushing touchdown with 11 minutes left in the first quarter. In the second quarter, St. Brown scored on a 14- yard reception and Miles Boykin also scored with a 54-yard reception, his first of the season. Justin Yoon added another three points with a 43-yard field goal. The 45 points of the first half marked the most in an opening half for head coach Brian Kelly. Although Adams left the game with an injury after the first quarter, he had already run for 159 yards in a single quarter and moved up to eighth on Notre Dame’s all-time rushing list. The pace slowed after the first half, as the Irish scored only one touchdown and Dexter Williams and Tony Jones Jr. both left the game injured. Notre Dame added one last touchdown in the last eight minutes of the game: Deon McIntosh scored with a career-long 27-yard carry and brought the Irish to a total 52 points over the RedHawks.

While the offense finished the game with over 500 total yards and maintained a strong running game, the defense was unrelenting and created opportunities for touchdowns. Notre Dame’s ability to both force turnovers and score off of them was indispensable throughout their first five games. The Irish scored two touchdowns from two forced turnovers against the RedHawks. Greer Martini had his first career interception, which Wimbush converted into a touchdown run, and Jerry Tillery stripped the football from RedHawks quarterback Gus Ragland, allowing for another touchdown reception by Claypool. Notre Dame’s defense effectively stopped Miami’s rushing game, as the RedHawks only ran for 115 yards, with a longest run of 27 yards by running back Alonzo Smith. Notre Dame did not allow a rushing touchdown.

The 52-17 win marked the 900th win in program history and Notre Dame’s second victory over Miami (OH), the first having occurred in 1909. The teams share a connection to legendary Coach Ara Parseghian, who began his career at Miami (OH) and later brought Notre Dame two national championships.