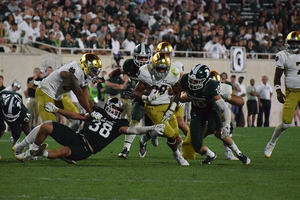 Player of the Game: Julian Love

One week after crushing Boston College in Chestnut Hill, the Fighting Irish took on another longtime foe, the Michigan State Spartans, in East Lansing. While still early in the season, the game was critical. With a win, the Irish would move to 3-1 and come home to face their supposed easiest opponent of the season, Miami (OH). With a loss, the Irish would sit at 2-2, and memories of the 2016 season would resurface.

The Spartans defeated the Irish 36-28 at Notre Dame Stadium in 2016. Notre Dame, however, still led the all-time series 48-29-1. Due to the history and high expectations for both teams, Notre Dame head coach Brian Kelly recognized the significance of the matchup. “[They are] a team who just a few years ago, like us, was, you know, vying for a playoff spot,” Kelly said in a press conference before the game.

Michigan State also looked to turn the page after going 3-9 the previous year. There were questions about how they would rebound as well as how their new starting quarterback, sophomore Brian Lewerke, would perform in his first big game. Entering the showdown with Notre Dame, the Spartans were a perfect 2-0 with wins over Bowling Green and Western Michigan.

As the sun set on Sept. 23, fans donning green and white filed in to Spartan Stadium. Notre Dame fans also filled a few of the sections. Due to MSU’s proximity to South Bend, students had the opportunity to buy tickets through Notre Dame and take a fan bus to East Lansing on the day of the game.

The Irish won the coin toss and elected to receive the opening kickoff. Their first drive silenced most of Spartan Stadium. Sophomore wide receiver Chase Claypool had two quick receptions. Quarterback Brandon Wimbush then connected with Equanimous St. Brown for a 40-yard completion, putting Notre Dame in the red zone. Soon after, helped by his offensive line, Wimbush strolled into the end zone for a 16-yard rushing touchdown, his seventh of the season. The Irish led 7-0 early.

Lewerke and the Spartans looked to respond on the following drive. Before long, they were in Notre Dame territory, facing a third-and-6 on the 45-yard-line. Lewerke targeted wide receiver Darrell Stewart Jr., but sophomore cornerback Julian Love saw it coming. He jumped the route, intercepted the pass and returned it 59 yards to the house. Just like that, the Irish were up by 14.

After a Michigan State touchdown and a few punts, the Spartans once again had the ball. It was now early in the second quarter and a one-possession game. On third-and-6, Lewerke tried to scramble for the first down, but the Notre Dame defense again stepped up big. Irish linebacker Greer Martini forced a fumble, and sophomore defensive end Daelin Hayes recovered.

Thanks to the timely turnover forced by the Irish defense, Wimbush and company took over on the Michigan State 24-yard line. On third-and-5, Wimbush found St. Brown for a first down. Facing another third down, this time third-and-6 at the 8, he connected with running back Dexter Williams in the far right side of the end zone. Following the Justin Yoon extra point, the Irish once again led by two touchdowns, the score 21-7.

Michigan State would not go down easily, though. They went 59 yards in eight plays on the following possession, setting up a second-and-6 on the Notre Dame 15. Lewerke handed the ball off to his running back LJ Scott, who looked primed to score. Just before crossing the goal-line, though, Irish safety Shaun Crawford punched the ball loose and recovered it in the end zone. Instead of a touchdown for the Spartans, the Irish took over on their own 20. The Notre Dame defense had forced its third turnover of the first half.

The Irish offense then went 80 yards in five plays, ending with a 14-yard touchdown run by Dexter Williams, his second score of the game. The Irish led 28-7 at halftime, and the game was out of reach. Michigan State scored 11 points in the second half; Notre Dame scored another ten. The final was 38-18 Irish.

The Spartans had nearly 500 yards of total offense compared to Notre Dame’s 355, and they had possession for almost 10 more minutes than the Irish. Nonetheless, this game felt like a dominating performance by the Irish. Why? Because Notre Dame’s defense forced three turnovers, and the offense scored touchdowns after every single one. It was a complete, team win for the Irish. As the focus shifted to Miami (OH), the team and their fans had a lot to be excited about.