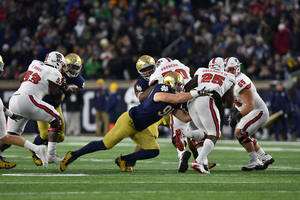 Following a rout of USC, No. 9 Notre Dame looked to continue their excellent run against No. 14 NC State. The Wolfpack boasted one of the nation’s best rushing defenses, allowing an average of only 3 yards per carry, with none of their previous opponents rushing for more than 4.04 yards per carry. On the other hand, behind perhaps the best offensive line in college football, the Irish couldn’t seem to stop running, averaging just over 7 yards per carry. Star running back Josh Adams had been averaging an astonishing 9 yards per carry, with starting quarterback Brandon Wimbush following closely behind. With both teams sitting at 6-1 and their respective strengths squaring off, something would have to break.

The game could not have started worse for Notre Dame. Following a three-and-out by NC State, the Irish could not move the ball past their own 18-yard line. Tyler Newsome’s punt was then blocked by James Smith-Williams and recovered in the Irish end zone by Germaine Pratt for an NC State touchdown.

The Wolfpack would take the lead again, however. After a remarkable 42-yard pass by NC State quarterback Ryan Finley to wide receiver Stephen Louis, the Wolfpack scored with a 15- yard touchdown pass to Kelvin Harmon. Once again, the Irish instantly responded. Continuing to pound the ball inside, complemented by 20- and 14-yard runs from Wimbush and Adams, respectively, Wimbush capped off the drive with a 3-yard touchdown run. After a three-and-out by NC State, Notre Dame grabbed the lead and never looked back. Josh Adams continued to batter the Wolfpack defense with multiple runs to advance the ball to the NC State 22-yard line. The Irish would score following two 11-yard pass plays, the latter to Kevin Stepherson to give Notre Dame a 21-14 edge.

The second half was completely dominated by the Irish. NC State’s initial drive could not have yielded a worse result. After advancing the ball to the Irish 42-yard line, disaster struck. Attempting to draw the Irish defense offside, the Wolfpack quickly snapped the ball. Thinking they were successful, the entire offensive line stood up and remained frozen. Behind them, however, Finley had a live ball in his hands. His attempt to throw it away fell into the hands of Irish cornerback Julian Love. With the entire NC State offensive line still frozen, and ample blockers surrounding him, Love returned the ball 69 yards for his second pick-six of the season, putting the Irish up 28-14.

The Irish would score once more. Maintaining the excellent form they had shown throughout the season, the Notre Dame offensive line shoved the Wolfpack’s defense aside, opening a large hole for Josh Adams to run right down the middle for a 77-yard touchdown. The remainder of the third quarter and entirety of the fourth were scoreless, and Notre Dame won 35-14.

Going into this game, NC State had allowed an average of only 91.3 rushing yards per game, with no team rushing for more than 133. In the win, Adams alone rushed for 202 yards, averaging 7.5 yards per carry. The Irish offense ran for a total of 318 yards, putting up 422 yards of total offense. The Notre Dame defense stepped up as well, holding the Wolfpack to only 263 total offensive yards. While this performance further strengthened Adams’ candidacy for the Heisman Trophy, this win was truly the result of a team effort. Multiple big offensive plays were made by a myriad of different players. In addition, none of those plays would have been possible without that stellar offensive line.

This win seemed to mark a turning point in the Irish season. Everything looked to be finally clicking, and sitting at 7-1, the Irish seemed to be in prime contention for selection to the College Football Playoff. By breaking down a team that was their alleged kryptonite, Notre Dame proved they could win, specifically against tough opposition.