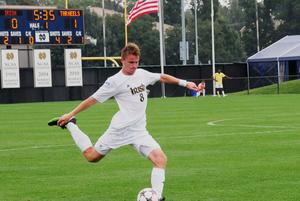 The Notre Dame men’s soccer team came into the 2014 season ranked No. 1 in the nation. But maintaining a number one ranking is no easy feat to accomplish. Now ranked No. 4, the Irish sit at 3-1-1 after a win over No. 20 Syracuse. But Head Coach Bobby Clark’s squad is entering a tough ACC schedule with the task of replacing key contributors from last year’s championship team.

In 2013, the Irish men took home a national title, defeating ACC champion Maryland. The National Championship win, the first in the program’s history, capped off a season in which the Irish lost only one game, going 12-1-6 in regular season play.

The loss of Harrison Shipp, MAC Hermann Trophy finalist and 2013 leading Irish scorer, will undoubtedly have an impact on the team’s attack. Shipp has since joined MLS’s Chicago Fire and made a strong impression. The rookie has racked up six goals and five assists in 25 games played for the Fire and has been suggested by many as a future United States men’s national team prospect. His presence, along with that of defender Grant Van De Casteele, now a member of MLS’s Colorado Rapids, will certainly be difficult to replace. 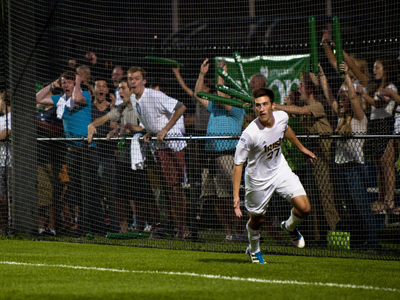 But the Irish side is full of skilled and experienced players who can fill the void Shipp leaves. Junior wide midfielder Patrick Hodan stands as the squad’s most important and impactful offensive player. Hodan ranked behind only Shipp in scoring last season, tallying 11 goals and five assists.

Hodan and senior central midfielder/ captain Nick Besler were recently named Preseason All-Americans by Soccer America. Besler, brother of USMNT star Matt Besler, was a first team All-ACC player last year and will be an important contributor for the Irish. The pair, along with juniors Evan Panken and Connor Klekota and senior Robby Gallegos should form a strong midfield rotation that can keep possession of the ball and create goalscoring opportunities, even without Shipp.

Graduate student Leon Brown will shoulder some of the scoring load as he brings experience and athleticism to the forward position. Brown scored for the Irish in the NCAA Championship and currently leads the team with two goals. Senior forward Vince Cicciarelli will bring impressive size to the Irish attack.

The squad retains much of the talent that led them to a title last year and seems poised to contend once again.

The young season, however, has had its share of bumps in the road. The Irish tied in double overtime against former Big East rival No. 6 Georgetown in the Adidas/IU Credit Union Classic, and lost 1-0 against unranked Kentucky in the Mike Berticelli Memorial Tournament, finishing third in the competition.

Things won’t get easier. The Irish men face stiff competition in the loaded ACC, arguably college soccer’s best conference. The conference schedule features contests against No. 15 Virginia, No. 5 Louisville, and No. 3 North Carolina. The Irish will have to stay in form through this stretch of conference matchups, which is punctuated with difficult out of conference games – including a battle against No. 11 Indiana – to earn an NCAA Tournament berth.

Nevertheless, pundits believe the Irish can push for another NCAA title. MLSsoccer.com ranked the Irish No. 1 in their ranking before the Kentucky loss, and the Irish should remain in the top ten in the NSCAA rankings even with the hiccup.

If the Irish can learn from their early missteps as they enter conference play, they will be able to make a run at the ACC title and the NCAA Championship. It will be no easy task, but the squad is full of veteran players who know how to win and have shown the ability to compete at a high level.