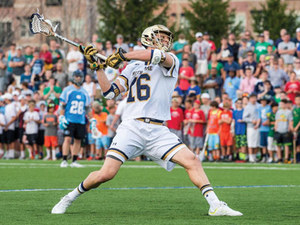 The top of Grace Hall is shining for Notre Dame men’s lacrosse, possibly the program most associated with that No. 1 distinction.

The 2016 Irish once again top the polls after a 12-3 season in 2015 and an ACC Championship. Notre Dame came heartbreakingly close to earning the national championship trophy, when the season culminated in a national semifinal appearance and a brutal 11-10 overtime loss to Denver.

The Irish were undefeated at home a season ago, a notable accomplishment that they hope to continue this season. The two best offensive playmakers from last year’s squad return as upperclassmen in 2016. Senior Matt Kavanagh enters his swan song campaign already holding the record for the program’s fifth most points. The Tewaarton Finalist — awarded to the top player in the nation — recorded 52 points last year with nearly two goals per game.

Fellow upperclassman Sergio Perkovic also returns as one of the top midfielders in the country. His 6’4”, 220-pound frame, combined with his agility, allowed him to collect a team-high 34 goals last year. Perkovic surpassed the hat trick mark with four goals against Georgetown in Notre Dame’s 12-7 season opening victory. Also expected to build on an impressive freshman season is sophomore attackman Mikey Wynne, who started every game and scored 33 goals last year. Wynne recorded a hat trick against Georgetown.

Senior Captain Matt Landis was named the best defensive player in the NCAA last season and also was awarded an honorary postgraduate scholarship by the ACC, along with ACC Defensive Player of the Year and a first-team All-ACC appointment. Fellow senior Captain Edwin Glazenger will also be expected to contribute defensively in his second full season as a starter.

MBA candidate Conor Kelly will man the crease as the goalie for the Irish. Kelly started six games last year after a strong 2014 season in which he made over 100 saves and was named to the All-ACC and All-NCAA Tournament teams.

Notre Dame’s schedule features a gauntlet of competition in March: The Irish will face Maryland, Denver and Virginia. With such an experienced team and a healthy dose of talent across every position, on paper, the Irish are capable of earning that national championship trophy that has so frustratingly eluded Head Coach Kevin Corrigan in each of his 28 seasons.