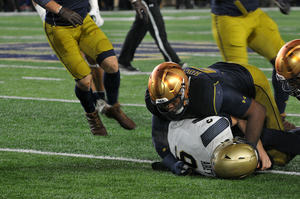 Player of the Game: Kevin Stepherson

In the 91st meeting between the Notre Dame Fighting Irish (8-2) and the Navy Midshipmen (6-3), the Irish were forced to battle through winds, rain and the perpetual torment of Navy’s triple-option offense. Coming off a brutal loss in South Beach at the hands of the Miami Hurricanes, the Irish found themselves with their College Football Playoff hopes surely dashed, and were in desperate need of a rebound in their final home game of an impressive 2017 season. Navy had never won more than two games in a row against Notre Dame, and following the Midshipmen’s 28-27 triumph in Jacksonville last season, they were poised to match that record.

Quarterback Brandon Wimbush and the Irish took the field sporting the sleek “Rockne Heritage” uniforms, which celebrated the new era of Notre Dame football with an homage to the man who built it all. Notre Dame’s first drive stalled quickly, and the Irish defense was forced to endure an 11- play, 33-yard drive that saw 10 rushing plays; not one gained more than five yards. Notre Dame took over on downs and notched up a field goal on an 11-play drive of their own.

The first quarter ended 3-0 in favor of the Irish, but the Midshipmen struck back with a field goal of their own. The drive gained just 49 yards in a possession that knocked more than seven minutes off the clock. As the first half neared its end, Notre Dame stopped the Midshipmen on their own 15- yard line. On the ensuing punt, Chris Finke was stripped of the football on the return and Navy kept their drive alive. Navy scored a touchdown on a 1-yard run from quarterback Zach Abey to take a 10-3 lead with just 1:08 remaining in the half. Thanks to two 23-yard completions from Wimbush, the Irish drove down the field in just a minute and tied the game at 10 after Wimbush dove through the pile into the end zone from two yards out.

With the weather continually worsening, the Irish had to find a way to prevail against one of the toughest, most physical teams they would face all season. Navy got the ball to start the second half and drove 72 yards on 15 plays, taking almost eight minutes off the clock and scoring their second touchdown of the game on a 12-yard pass from Abey to Craig Scott. This was one of just three times Navy would successfully pass the football on the day.

Once again forced to respond, the Irish put the ball in the hands of its playmakers. Josh Adams was handed the ball on four consecutive plays and picked up 48 yards, including a 30-yard scamper which set up Wimbush’s 30-yard touchdown toss to Kevin Stepherson. The 48 yards from Adams on singular drive was more than he gained in either the Wake Forest win (22 yards) or the Miami loss (40 yards).

With possession to start the fourth quarter, the Irish offense drove 80 yards to take the lead one last time with a 9-yard touchdown pass yet again from Wimbush to Stepherson. Wimbush would finish the day with 164 yards on 9 for 18 passing and two touchdowns to go along with 41 yards rushing and another touchdown. The Irish defense held the Midshipmen on the following drive thanks to Greer Martini and Julian Love, who led the team with 15 tackles (seven solo) and 14 (10) respectively. But it was Troy Pride Jr., the sophomore defensive back, who made a clutch interception to give the Irish the chance to run out the clock. Navy would force the Irish into a three-and-out and get one last shot at tying the game in its dying embers. Navy drove all the way to the Notre Dame 25-yard line, but the Irish stopped the fourth-down conversion to seal the win, 24-17.

After their final home game, the Irish sat at 9-2. The following week, they would travel to California to take on the Stanford Cardinal and attempt to secure a spot in a New Year’s Six bowl game.