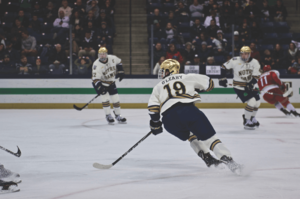 Morrison, who scored the game-winning goal in overtime against Ohio State in last year’s Big Ten Tournament championship game, once again saved the game, putting the Irish in the lead for good late in the second period.

Freshman defenseman Spencer Stastney scored his first-ever collegiate goal in the first period after breaking through a line of defenders and firing a backhanded shot over the glove of Penn State goalie Peyton Jones. Junior forward Cal Burke tallied another goal for the Irish in the second period, breaking the 1-1 tie at the time.

Morris also came up big for the Irish and saved all 12 shots he faced in the final period, finishing with a total of 46 saves. This marked the culmination of a very impressive tournament for Morris, where he posted a 0.977 save percentage and a 0.75 goals- against average. He was named the tournament’s most outstanding player. Fellow Irish teammates Morrison, Stastney and junior defenseman and captain Andrew Peeke joined Morris on the All- Tournament team.

The Irish entered the NCAA Tournament for the fourth consecutive year, this time as a three- seed. They defeated the two-seed Clarkson Golden Knights in the opening round in New Hampshire. However, the Irish’s season came to an end one day later in the regional final against the University of Massachusetts.