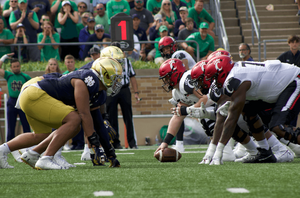 The starting quarterback for the Irish for every game of the season thus far, Coan has been put to the test the most of any of the signal-callers on the team’s roster. The graduate transfer from Wisconsin won the battle for the starting position in the preseason due to his experience and perceived reliability compared to his two younger competitors. Coan’s body of work as a starter remains uneven for the season, though. He has posted the best conventional stats of any quarterback on the team and led the team to tight victories against Florida State and Toledo, but his lack of mobility and evasiveness has not paired well with the Irish’s inexperienced offensive line. As a result, he has taken 20 sacks for a loss of 112 yards — a large reason why the Irish offense has been so stagnant this year. Coach Brian Kelly’s reasoning for sticking with Coan so far into the season is understandable; Coan’s 16 wins (and seven losses) as a starter compare quite favorably to his competitors’ grand total of zero starts. Plus, when he is comfortable in the pocket, he has demonstrated himself to be a consistently good – though never great – passer. The issue is that there is no indication that any quarterback the Irish strut out under center will ever be comfortable in the pocket. The team’s inexperienced, banged-up offensive line is not going to dramatically improve, and Coan is not going to suddenly become a backfield magician, making the continued decision to start the graduate transfer questionable.

The third-string quarterback on the depth chart, Buchner has nonetheless been a frequent presence on the field for the Irish, appearing in four of the Irish’s six games and providing a much-needed offensive spark against Toledo. The true freshman quarterback, who was touted as the one of the top quarterback prospects in the 2021 class, has been utilized mostly for his legs, often coming in for only a drive or a few plays at a time and taking snaps almost exclusively for designed runs or options. In his first appearances, his mobility and ability to improvise certainly seemed a welcome contrast to Coan’s affinity for remaining in fast-closing pockets. But in his last few appearances, his current limits as a passer have become apparent, as shown by his combined three interceptions against Cincinnati and Virginia Tech. Altogether, it bodes well for the future for Irish fans to see Buchner get these reps so early in his career, but his inexperience as a passer might be too risky for the Irish to give Buchner starts or consistent playing time under center.

The backup quarterback under Ian Book during last year’s playoff run, Pyne is the only quarterback on the roster to have taken snaps for the Irish during each of the past two seasons. The redshirt sophomore was also the last of the Irish quarterbacks to take the field, first coming in against Wisconsin after Coan suffered an ankle injury. Pyne entered the game with the Irish tied 10-10 with the Badgers and immediately breathed some life into the sluggish Irish offense. He confidently led the team down the field on one of the offense’s two touchdown drives of the day, and his energy was an exciting counterpoint to the offense’s earlier stagnation under Coan. Particularly, Pyne’s ability to improvise and make throws from a collapsing pocket was a pleasant sight for Irish fans used to seeing Coan tuck the ball and fall to the ground whenever pressure came. Nonetheless, a healthy Coan was once again named the starter against Cincinnati a week later. But as the Irish fell behind against the Bearcats and the offense once again struggled to get going (while throwing away the chances they had to costly turnovers), Kelly turned to Pyne once again in the third quarter. Pyne failed to reverse the Irish’s overall fortune in the game, but he was able to spark a comeback that at least kept the game close into the fourth quarter. The tough reality is that the Irish have to pick one starting quarterback with the expectation of sticking with him throughout whole games and ultimately the season. And if the Irish are going to stick with one guy, Pyne makes sense in multiple ways. He has been just as consistent a passer as Coan while avoiding sacks much more effectively and has also brought an energy that Coan seemed to have lost in the first part of this season. These factors, coupled with Pyne’s youth as Notre Dame seeks to develop talent for the future, could make Pyne the right choice as the Irish starting quarterback going forward.