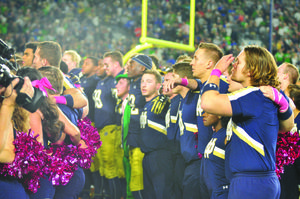 The 2016 Notre Dame football season certainly was a memorable one. Following a year where the Irish were one kick away from a potential playoff berth, this season’s results could not have been more different. After an embarrassing 45-27 loss to the University of Southern California Trojans in Los Angeles on November 26, the Irish finished their season 4-8 for what is only the second losing season of head coach Brian Kelly’s career. This year’s season will not be remembered because of the great moments it afforded, but rather because it was one of the worst in Notre Dame’s history — in fact, it was the second worst season in the past 50 years (eclipsed only by the Irish’s 3-9 season in 2007).

The Irish’s final game was a brilliant representation of everything that went wrong this season. On all fronts, the team was inconsistent. Defense and special teams were poor. The offense showed sparks of brilliance but often failed to capitalize. The team’s need to improve in all areas was visibly exploited by the Trojans in their resounding victory. After allmost eliminating themselves from bowl contention by falling to Virginia Tech at home the previous week, the Irish ensured their season came to a resounding halt by dropping the game in Los Angeles.

It isn’t all doom and gloom, however. This year’s Irish team was comprised of 60 underclassmen. A lot of this season’s shortcomings came from a lack of experience and leadership. The harshness of this year’s results, especially since every loss except the USC game was by eight points or less, will no doubt be of great benefit to the maturity of the team. This, coupled with a very strong recruiting class, certainly makes it seem like the Irish are poised to rebound next season.