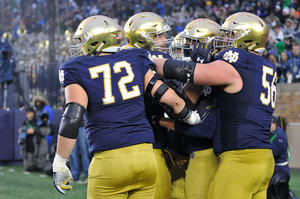 Player of the Game: Chase Claypool

In the ninth game of the season against unranked Wake Forest, No. 3 Notre Dame looked to capitalize on its first game ranked in the top 5 since November 2015. The Irish did just that, holding off the Demon Deacons 48-37 for their seventh consecutive win. With the win, the Irish’s fifth at Notre Dame Stadium this season, Notre Dame moved to 8-1 overall, while Wake Forest fell to 5-4.

Wake Forest’s Mike Weaver knocked in a 34-yard field goal to open the scoring after the Demon Deacons marched 82 yards in 14 plays but could not find the end zone. The Irish responded with a scoring drive of their own, capped off by a 6-yard touchdown run by Brandon Wimbush to give the Irish a 7-3 lead after a quarter of play.

Notre Dame running back Josh Adams, thought to be a candidate for the Heisman Trophy early in the season, was injured late in the first quarter and taken out of the game. Adams did not return, but Notre Dame head coach Brian Kelly said Adams’ lack of playing time during the remainder of the game was precautionary and due to Adams not feeling his best after a stressful week.

To start the second quarter, Justin Yoon converted a 34-yard field goal of his own. On the first play of the ensuing Wake Forest drive, Notre Dame cornerback Julian Love intercepted a pass from Wake Forest quarterback John Wolford and ran it back deep inside Demon Deacons territory. One play later, Tony Jones Jr. rushed for a 5-yard score to put the Irish up by 14.

Both Wake Forest and Notre Dame exchanged touchdown drives in the opening minutes of the second quarter, with Wolford and Wimbush rushing for 20- and 50-yard touchdowns, respectively.

After a Wake Forest punt pinned the Irish inside their 1-yard line with three minutes to play before halftime, Notre Dame closed the first half with a touchdown drive to remember: 99 yards on nine plays. The memories weren’t all positive, however. Wimbush rushed for 28 yards down to Wake Forest’s 1-yard line, but was hit hard on his hand and was replaced for the remainder of the drive by redshirt freshman Ian Book. Book didn’t take long to close out the drive, tossing a 1-yard touchdown pass to tight end Nic Weishar to make the halftime score Notre Dame 31, Wake Forest 10.

The second half of the game started off slowly with a Wake Forest punt. Yoon kicked a field goal on the Irish’s next drive, but falling behind by 24 seemed to light a fire in the Demon Deacons. The next five drives — three by Wake Forest, two by Notre Dame — resulted in touchdowns, as the Demon Deacons became the first team in 2017 to score more than 20 points on Notre Dame.

The final three minutes of the third quarter featured as many touchdowns. Alex Bachman hauled in a 34-yard pass from Wolford but again the two-point conversion failed, keeping Wake Forest down by 18 points. The Irish responded when Wimbush connected with Chase Claypool for a 34-yard touchdown strike, and Matt Colburn rushing in from 24 yards out. After three quarters, the Irish still led 41-23.

The offenses did not slow down heading into the fourth quarter. Deon McIntosh rushed for a 2-yard touchdown to put the Irish up 48-23, seemingly in control of the game. Wake Forest then scored two more touchdowns, once with Wolford completing an 11-yard pass to Jack Freudenthal and once with Isaiah Robinson rushing for a two-yard score. Though the comeback effort was valiant, the Demon Deacons could not complete the task and the Irish hung on by a 48-37 margin.

“Wake Forest executed their offense terrifically,” he said. “They were really, really good tonight … I think it’s fair to say that Wake Forest played very well and Notre Dame needs to obviously understand how hard this game is if you’re not locked into all the traits necessary to play at a high level.”

With Adams’ absence notable during the game, Wimbush took the spotlight, tallying a career-best 280 yards passing and rushing for another 110. Notre Dame quickly had to shift their focus to the biggest road test of the year: a date with Miami in South Florida.