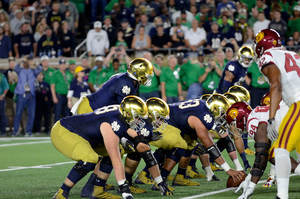 Player of the Game: Te'von Coney

Notre Dame fans from around the country made their way into South Bend, energized by the team’s hot start. Students cut their fall breaks short and eagerly returned to campus. The biggest home game of the year had finally arrived: USC was coming to town.

Many call the rivalry between Notre Dame and Southern Cal the greatest intersectional rivalry in college football. It started back in 1926, when Knute Rockne and the Fighting Irish travelled across the country to Los Angeles and beat the Trojans 13-12. Since then, the two teams have played another 88 times. Notre Dame leads the all-time series 47-37-5.

This particular game wasn’t just about history. Both teams had their sights set on the College Football Playoff. USC was a popular preseason pick to win it all, and their star quarterback, Sam Darnold, was a contender for the Heisman. They were 6-1 and No. 11 in the AP Poll.

The 5-1 Notre Dame squad, despite starting the season unranked, was now No. 13. They lost to now-No. 3 Georgia by only one point and beat their other opponents by an average of 28 points.

No team with two losses had ever made the college football playoff, so it was clear: this was essentially an elimination game.

Notre Dame received the opening kickoff and quickly went three-and-out. Chase Claypool was open down the sideline on second down, but Irish quarterback Brandon Wimbush couldn’t find him. The Irish punted, and the Trojans took over with outstanding field position, starting at the Notre Dame 43.

Just as USC appeared to threaten, Notre Dame’s defense stepped up. The first snap to Darnold was high, and he bobbled it. A swarm of Irish defenders wrestled the quarterback to the ground, and linebacker Te’von Coney ripped the ball from out of his hands. To fans and announcers, the play initially looked like a sack. When the pile of bodies dispersed, however, Coney ran out with the ball. Notre Dame Stadium erupted.

The Irish offense was quickly back on the field. After a pair of first-down runs by Wimbush and Kevin Stepherson, the junior quarterback fired a perfect pass to wide receiver Equanimeous St. Brown in the back of the end zone. It put the Irish up 7-0.

Notre Dame had once again turned a turnover into points. This domination on both sides of the ball continued for the entire game.

After a USC punt on their next possession, the Irish went 79 yards in 10 plays. Of those 79 yards, 56 came on the ground as Notre Dame barely needed to pass. The one completion of the drive was a perfectly placed, 23- yard touchdown strike to Stepherson. He had missed the first four games of the season due to a suspension, played limited snaps against Miami (OH) and UNC, and now was back in a productive role for the Irish offense.

The score remained 14-0 for a while. USC had come back from a 14-point deficit one week earlier vs. Utah, so the game was still very much within reach for the Trojans. They put together an impressive drive to end the first quarter and were in the red zone to start the second. Facing a third-and-1 on the 3-yard line, the Irish defense stood tall. They forced a field goal, which Chase McGrath then missed. The shutout was still intact.

Notre Dame’s offense took over but soon had to punt for a second straight time. They caught a break, however. USC’s return man, Jack Jones, muffed the punt, and senior linebacker Drue Tranquill fell on the ball at the 9-yard line. Two plays later, star running back Josh Adams barreled his way across the goal line for his sixth touchdown of the season. The Irish led 21-0.

Darnold and the USC offense came back out ready to pass even more than they already had. The Irish defense was just as ready. On the next Trojans possession, Darnold threw his 10th interception of the year to senior cornerback Nick Watkins. It was USC’s third turnover of the first half.

Stop me if you’ve heard this one before: the Irish scored following the defensive takeaway. It took seven plays, ending with a 4-yard run by Wimbush on third-and-goal. The Irish led their ranked rival by 28 points at halftime. Notre Dame rushed for 190 yards in the first 30 minutes. USC, meanwhile, was stuck at minus 4.

The Trojans scored a touchdown on the opening drive of the second half, but the Irish were quick to respond. They went 65 yards in eight plays, running the ball six times and passing only twice. Wimbush had a highlight run on first-and-20 where he juked out one defender and lowered his shoulder into another. On the next play, he ran into the end zone for his second rushing touchdown of the night and his tenth of the season.

USC responded with another score, but it was too little, too late. The Irish offense continued to run the ball for most of the second half, and Josh Adams found the end zone twice more. He even ripped off an 84-yard touchdown run, his longest of the season.

As time wound down, Irish coaches, players and fans jumped with excitement, congratulating each other on a huge win. Three wide receivers — St. Brown, Claypool and Stepherson — gave Brian Kelly an ice bath on the sideline. The clock hit all zeroes, and the score read Notre Dame 42, USC 14. This was more than just a win versus a rival. It was a notice to the college football world: Notre Dame was a legitimate playoff contender.

Looking at the final stats, Notre Dame controlled the game in every way. Offense, defense and special teams all came up with big plays.

For the Irish offense, the ground game looked as lethal as ever. The team rushed for 377 yards and 5 touchdowns. Two of those came from quarterback Brandon Wimbush, who had 106 yards rushing, and the other three were by Josh Adams, who finished with 191 yards. With this performance, Josh Adams seriously entered his name into the Heisman conversation.

Questions still remained about how effectively Wimbush could throw the ball. He went 9 for 19 with 120 yards. However, he also threw two of his best passes of the season — the touchdown strikes to St. Brown and Stepherson. Time would tell if Notre Dame could finish the year the way they wanted: winning games with a run-focused offense that passed when necessary.

The Irish also continued to force turnovers. The opening fumble and the Watkins interception proved crucial in the win, as the offense scored touchdowns following both takeaways.

Even special teams had a great night. Justin Yoon went a perfect 7 for 7 on extra points, and the team took advantage of a muffed punt. Tyler Newsome also had a punt at the end of the first half that went out of bounds at the 1-yard line. Everything came up Irish.

Despite the convincing win in front of a home crowd, the team had to quickly look ahead. With No. 14 NC State coming to town the following week, the Irish would once again have to be on their game. Players and fans were confident, though, and rightfully so. With a dominant win against a ranked opponent in their back pocket, the Irish were prepared to face another tough test and continue the playoff conversation.

“We were prepared. We knew we needed to get off to a great start ... I think the turnovers were key for us in the first half and being opportunistic which has been what we’ve been all year.”  - Coach Brian Kelly