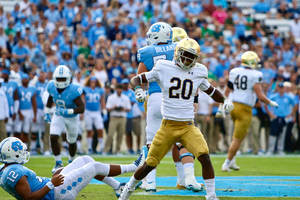 Following a dominant home victory against Miami (OH), No. 21 Notre Dame hit the road to take on North Carolina. With primary quarterback Brandon Wimbush out nursing a foot injury, sophomore Ian Book got the call. Despite putting an inexperienced quarterback under center on the road, the Irish came ready to play.

“He is a very confident kid,” head coach Brian Kelly said of his interim quarterback. “There were no jitters with him.”

For the sixth time in as many games, the Notre Dame defense forced either a punt or a turnover on the opponent’s first drive, handing UNC a three-and-out. Both teams started strong defensively, as there would be no scoring until the second quarter. Although the 15-play drive was the longest touchdown drive of the season, Notre Dame eventually capitalized. Book threw his first career touchdown pass to graduate student wide receiver Cameron Smith, and the Irish jumped out to a 7-0 lead.

It didn’t take long for Notre Dame to add to that margin. On their next possession, junior running back Josh Adams broke away from the pack and raced 73 yards down the field for a touchdown. By the end of the night, Adams moved to seventh in all-time rushing yards at Notre Dame with 2,544 yards.

UNC responded with a touchdown before halftime, the first team to convert a Notre Dame turnover into seven points all season. Despite the offensive mistake, the Irish defense made up for it just minutes later. With the Tar Heels pinned at their own 1-yard line, the defensive line surged forward and forced a team safety, winning the Irish two points. This was the first true defensive safety forced by Notre Dame since 2002 and brought the score to 16-7 at halftime.

Notre Dame came out strong after the half, intercepting the Tar Heel quarterback and converting it into a field goal. However, the Irish would shortly get a taste of their own medicine. Knocking on the door of the UNC red zone, Book’s pass was picked off by the UNC defense. This turnover ended Notre Dame’s perfect record in the red zone, as they had previously converted on all 24 of their scoring opportunities.

On the next possession, freshman Deon McIntosh took off for a 35-yard touchdown run, Notre Dame’s 13th rush of that length or longer. This stretched the score to 26-7 in favor of the Irish. McIntosh recorded the first 100-yard rushing game of his career, replacing Adams after a dehydration issue.

The Tar Heels added a field goal, but were unable to muster up any more offense. McIntosh, however, contributed another touchdown before the end of the game, bringing the final score to 33-10.

The victory brought the Irish record to 5-1, and marked the first time that Notre Dame had won three straight power-five road games by at least 20 points since 1973-74. It was also the sixth straight time that the Irish had triumphed with a first-time starting quarterback.