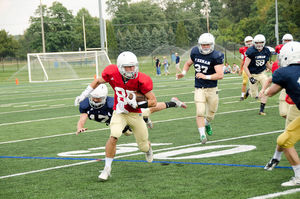 Fall Saturdays at Notre Dame are some of the most exciting and anticipated days of the year. Whether the football team is on the road or at home, students dawn their blue and gold and gather to cheer on the Irish. Fall Sundays carry a weight of their own, too. Interhall football squads and fans face off on the Ricci Family Fields, hoping to play their final game in Notre Dame Stadium.

It may sound silly, but the league strikingly resembles the NFL. Some teams like O’Neill are rebuilding, trying to form their roster from the ground up with an eye on the future. Others like Dunne are beginning their ascent and have started this season much better than the last. Then there are the powerhouses: Duncan and Stanford, the two teams that met in the championship game last year. Stanford won the crown by a score of 7-6, but both the Griffins and Highlanders have turned their attention to this season.

O’Neill finished 0-3 last year, forfeiting two of their games. Current sophomore Brendan Burke and Rector Father Chris Rehagen seriously questioned if the Mobsters could even field a team this season. “I asked upperclassmen to either play or at the very least spread a positive message about the team to first year students,” Burke told Scholastic. The recruiting worked, as 20 students signed up for the team this year. They lost their first game to Alumni 13-0, but Burke and others are hopeful about the future.

Dunne Hall experienced similar frustration in its inaugural season as their team finished 1-2. They have already shown promise this year, however, starting 2-0 with wins over Sorin and Knott. Dunne’s most unique feature is its roster — filled with not only Dunne residents but also seminarians from Old College eager to get in on the interhall action.

Junior Seminary and Dunne QB Johnny Ryan, when asked why he joined the Sentinels, said, “The Dunne practice schedule worked with our prayer schedule. That’s kinda how it happened.” Ryan and his fellow seminaries, linemen Stephen Kawulicz and Keenan Bross, have meshed well with the Dunne team and look forward to the rest of the year.

Duncan Hall has also seen its fair share of football struggles, finishing 0-3 in 2015, and only seeing one win in the four yeares beforehand. Quarterback Matt Kase, like Burke in O’Neill this year, wanted to change the culture: “We realized it was gonna take a lot more, and [we] encouraged everyone in the dorm to give us the support we needed.”

Kase and other interhall veterans recruited heavily at dorm mass and other hall functions. Their hard work paid off. Thanks to Kase, high school phenomenon and running back Micah Rensch, a solid offensive line and a full 24-man roster, Duncan finished 2-1 in the regular season last year. They beat Dillon and St. Edwards in the playoffs, falling to Stanford in a heartbreaking finale in Notre Dame Stadium.

Coming so close to the title and returning all but two players, the Highlanders like their chances this season. “We’re hoping it’s our year. We really think it’s gonna be,” Rensch said. Duncan trailed Fisher 12-7 in their first game of the year before it was delayed, and the matchup is set to resume on Oct. 8. They won their second game over Carroll 20-0.

While Duncan aims for redemption, Stanford eyes a repeat. They beat rival Keenan 14-6 in the famous “Battle for the Chapel” to start the season. The victory ensured that the joint chapel between the dorms would be called the “Stanford-Keenan Chapel” until the two teams face off again.

Even though the matchup was only game one, fans from both halls crowded the sidelines. “The Stanford Hall syndicate came out. One of the sophomores made a Griffin outfit, and pretty much the whole dorm came out … it was just awesome,” Stanford cornerback Sean O’Brien told Scholastic.

O’Brien and senior tight-end Peter Ryan have high hopes for what may be their last couple months playing football. For them, the perfect way to end their careers would be with another championship win under the stadium lights.

Each team has a special chemistry, allowing freshmen and off-campus seniors to grow close through wins and losses. Teams form bonds with one another through heated rivalries, hard-fought games and highly anticipated matchups. Dorm communities become tighter as fans cheer on their friends at the Ricci Family Fields and in Notre Dame Stadium. The Notre Dame community strengthens when thousands of people keep up-to-date on how the interhall football season is going.