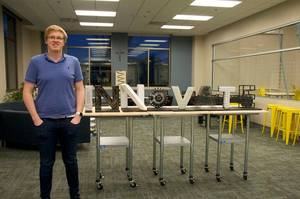 Through the IDEA Center, four groups of Notre Dame innovators had the chance to present their projects to thousands of potential investors, competitors and fans at the Consumer Electronics Show (CES), which ran from Jan. 6-10 in Las Vegas, Nev.

Rian Mc Donnell, the CEO of DeLive, estimates that some 320,000 people attended the event and that “technical partners and investors” perused the booths, with some people searching for military applications of these technologies. This show featured four phenomenal groups from Notre Dame.

Bradley Tener, a recent graduate of Notre Dame, created Frost Control Systems to measure the temperature and conditions of streets in real time, using cameras and temperature gauges. That information is sent to the city so city officials can decide if and when to deploy snowplows, salt and other road-clearing methods so drivers can have the safest possible conditions. This has already been implemented in Fort Wayne and South Bend, and could potentially expand to other areas of the country.

A group of IDEA Center staff also presented SafeSlide, a smart lock for sliding glass doors that uses smartphones or fobs to lock and unlock. This system works with other applications such as Alexa, and the lock can resist entry through over 600 pounds of pressure.

Finally, DeLive, a drone that delivers defibrillators within five minutes to people suffering from a heart attack, was created to keep people in cardiac arrest alive before they arrive at a hospital and receive medical care. The CEO of DeLive, Rian Mc Donnell, is part of the ESTEEM Graduate Program at Notre Dame. He learned that “there’s only a 10% survival rate in the US for cardiac arrest,” partially because people “don’t get there soon enough.” He immediately decided to try to rectify that problem. In this case, the “customer is a city,” and the goal is to “dot the city so every part of the city can be reached by a drone within five minutes.” These drones stop at the front door.

Currently, the system relies on signal drones, but DeLive is working its way up to fully autonomous drones. The company plans to partner with Emergency Medical Systems so that the drone can be dispatched as soon as 911 receives the personal identification information of someone who is going into cardiac arrest. Mc Donnell emphasized that the IDEA Center promotes a very collaborative environment: “everyone builds everything.”

DeLive is currently aiming to begin a trial of its system in South Bend or Fort Wayne. McDonnell additionally emphasized the benefits of the ESTEEM program: “it gives you a business background … [people] get talking and connections happen, and that really speeds up the whole process.”