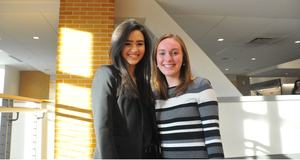 “We’re hoping to extend the Notre Dame family to all walks of life on this campus, and make sure it really and truly is a very inclusive one.”

The Ingal-Galbenski ticket is polished, passionate and thoughtful from the outset. Their political ambitions shine far beyond Notre Dame. Rachel Ingal, a junior political science major, hopes to use her experience working at the Office of Global Women’s Issues in Washington DC in a think tank, in a research setting, or in another arena that allows her to make an impact both domestically and internationally. Sarah Galbenski, a junior majoring in Spanish and minoring in global affairs and peace studies, will use her Chilean study abroad experience to hopefully work in a year of service or obtain a master’s in international relations.

Ingal has been involved in Student Government since coming to Notre Dame. As a freshman, she was a part of the First Undergraduate Experience in Leadership (FUEL) and has become the head of FUEL’s diversity and inclusion section in Executive Cabinet as a sophomore.  She is currently Badin Hall’s vice president and is on the Junior Class Council.

Galbenski served in hall council her freshman year and as a Gender Relations Committee commissioner for Walsh in sophomore year. She also has been involved in a variety of non-governmental positions, such as folk choir. Despite not serving directly as a member of student government, Galbenski asserted her desire to learn.

Ingal and Galbenski are aware of current student government hurdles. One such hurdle includes claims that Callisto is incompatible with Notre Dame’s tri-campus network. The ticket vows to find other solutions. They are targeting other software that also provides the ability to create joint appeals for cases with common perpetrators.

The ticket stressed that their awareness of the inner workings of student government as well as their experiences in other realms reveal they strike the perfect balance between being an “insider” and an “outsider.” Ingal reveals that “Student government is often very insular … we have a lot of awareness campaigns” to get the word out and break down barriers between these groups.

Ingal and Galbenski go further in a plan that blends pragmatism and idealism with  pre-planned communication. They and their staff members promise to attend club meetings and hall councils as well as other “neutral” and “inclusive” spaces to discuss issues relevant to the student body.

While “Hot Chocolate and Chat” — the current office-hours type communicative setup hosted by current leaders Elizabeth and Pat in their office — is a great idea, not all students know that it exists. Ingal and Galbenski hope to bring student government to more frequented locations to improve engagement, thus living out their campus slogan:  “accompany, advocate and amplify.”

Another priority in terms of communication and breaking down barriers is updating the Student Government website to share schedules, give meeting reports, include an updated event calendar and schedule time with people who are dying to share their knowledge or are inquisitive about the process as a whole.

Ingal and Galbenski’s platform distinguishes itself most however in the issue of club funding allocation. Currently, if one president decides to cut funding from a specific area of student government to give it to clubs, the money to student government as a whole is reduced permanently via the Constitution. However, the next president can give more money to that department at the expense of another group such as class councils. This perpetuates the student government’s desire to not cut from any of their budgets to give to clubs. This is in direct contrast with student reports that their clubs are underfunded.

Ingal and Galbenski intend to incentivize change by mandating that student government executive cabinet members earmark money for collaboration and club grants. This way, student government must find clubs that are providing benefits for students in order to sponsor them. A senate bill that shifts monetary allocation from student government to the Club Coordination Council, has been tabled multiple times and appears stuck in legislative purgatory. Rachel and Sarah provide a breakaway in their idea, alleviating the middleman and legislative issues in a way that will get money to clubs quickly and painlessly.

In terms of meaningful impact to student leisure, Ingal reveals a plan to construct “nap pods” on campus. A convenient alternative to falling asleep in one’s finance class or a chair in LaFun, these would allow students to take well-deserved breaks in relative privacy.

Notably, they are an all-female ticket. They both have an innate likeability and a determined attitude. Their campaign platform ends with a “message of gratitude,” which reflects Galbenski’s Center for Social Concerns experience. They do mention that their platform is a “living, breathing document” and always subject to change, but the emphasis is on inclusion through amplifying other voices. A few points, such as bringing more diversity into RA positions on campus, remain fluid in terms of direct courses of action, but they are full of energy and cognizant about the necessity to change.

Before the interview, news broke that the Ingal-Galbenski ticket broke a subsection of the Student Government Constitution stating that “Candidates may not communicate an endorsement such that it can be construed to represent that of a Residence Hall, Student Union Organization, University department, office or official.” While details were not revealed due to Student Government policies, Rachel and Sarah stressed they are not here to fight but to “grant everyone grace.” Sarah also said that they have always been and will continue to be “hyper-ethical” in their approach, platform and candidacy.

Overall, Ingal and Galbenski are committed to listening to dialogue: Galbenski said,  “We know that there are so many experts on this campus that are waiting to be listened to be heard: we just want to take their passion and their fire and their energy and serve as a liaison between the people and the power and convert those incredible ideas into concrete policy.”