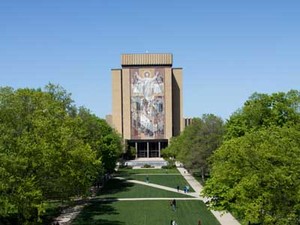 Looking back through the Scholastic record books; hearing the reverent stories of alumni, both young and old; knowing the names of certain movements and events yet never truly being able to capture what exactly went on behind that moniker: these patterns all produce one assurance. The University of Notre Dame used to be a protest campus — indeed, a thriving one.

Nowadays, however, classes can hear administrators bemoan the lack of students registering to have official protests; national movements sweeping across college campuses appear to be swept aside by young adults here within minutes of first reading the headlines.

Due to all of these reasons, it was refreshing to speak to members of the Student Worker Participation Committee (SWPC). The committee, which is still figuring out its exact logistics while knowing its mission, is the first of its kind to enjoy full participation in official processes as a student committee, according to former student body president and member Bryan Ricketts.

The committee was formed in response to the Worker Participation Committee (WPC), whose members were appointed by John Affleck-Graves in 2013, following Notre Dame’s long-running efforts to combat abuses in labor conditions. These specific instances include the school being the first university to institute a labor code of conduct for licensees, in 1997, as well as a Task Force in Anti-Sweatshop Initiatives, appointed by Rev. Edward Malloy, C.S.C. two years later. This specific committee had one task among others that especially stood out: reassessing the China policy, particularly given the university’s growing involvement with the country.

This produced the need for the SWPC — whose creation was formally endorsed by the WPC’s spring 2015 report recommendations — with bylaws that were officially ratified on Feb. 9, 2016 as the Student Subcommittee of the Worker Participation Committee at the University of Notre Dame. Its members hail from groups as far-reaching as the Student International Business Council (SIBC) to the Progressive Student Alliance (PSA), while also allowing open academic positions to be filled by interested individuals with no group affiliation.

While meeting with a selection of the members April 3, I heard stories of Hannah O’Brien, one of the official SWPC representatives to the WPC as a whole, who recently traveled to Guatemala and El Salvador alongside university administrators to assess working conditions. One person she traveled alongside? Former student body president Lauren Vidal. The passion among students runs from undergraduate to alumni, all regarding one policy and a host of relations.

The passion for this topic, whether newfound or longstanding, was evident in this LaFortune meeting room: a passion that appears to leap off the pages of the archives yet is hard to be found in daily conversation today.

Regarding a policy and its repercussions that have far-reaching international repercussions yet little campus publicity, these students are addressing a problem and issue much in the way the alumni that came before us did — in a plea to social justice that has too easily been forgotten.