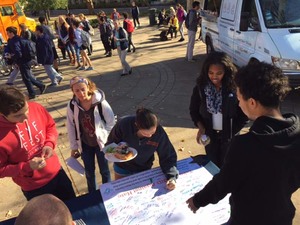 The setting is casual: a small group of friends gathering together in early November over Einstein’s bagels and too many jokes to count.

Maureen McKenney, Assistant Director for LGBTQ Initiatives and advisor for PrismND, welcomes everyone to this informal coffeehouse gathering. In support of Stand Against Hate Week, students and faculty from diverse backgrounds and marginalized groups sit around and begin to share their stories.

This, among other events that took place last month, was commissioned in order to promote an end to discrimination and foster a community of understanding and acceptance.

“A lot of people say they don’t have a problem with diversity, until they are confronted with it,” says sophomore David Scaramucci.

Many of the participants echo this statement, but some are saddened that more people had not come to ask questions and contribute to the discussion.

“Why is this room so small?” junior Dean Merriweather says.

With roughly 10-12 people in attendance, the small turnout reveals some of the issues this university faces with regards to accepting marginalized groups. According to Dean, too many people are afraid to ask questions about things they do not understand. What they fail to realize is that this simply perpetuates the cycle of misunderstanding.

One of the main discussion topics was how so many students are afraid to express their true identity. Eve Morrigan, a transgender student, explained how isolating her time at Notre Dame could sometimes be.

“If I didn’t volunteer to do this, no one would be here,” she says on representing other people who share her gender identity.

Several weeks later, sophomore Devon Harford, a bisexual student and English major who participated in the coffeehouse talk, sat down to offer more insight into the issues presented at this gathering.

“It’s interesting because a lot of people who come from conservative places don’t see a lot of the smaller issues that I do because I come from a place that is really liberal, the Connecticut and New York area. There it is much easier to come out,” she says.

Harford went on to express that because there is a high population of conservative students on campus, at times there can be barriers to understanding the perspective of marginalized groups. Be it religious belief or upbringing, many of these students have chosen to turn a blind eye to struggles these groups experience on a daily basis.

“I was talking to a girl who said that if she were living with someone who brought a girl home, she wouldn’t know what to do,” Harford says. “She said she’d be so uncomfortable. And I said well, you should probably just leave the room, like you would if she’d brought a boy home.”

In sharing her personal experience, Harford talked about how lucky she has felt to have had roommates who have embraced her sexuality and her beliefs.

“I have a huge pride flag on my wall,” she says. “And my roommates have been so understanding and supportive of my beliefs. Although I personally haven’t experienced overt bigotry, I know there are people here who have and, for them, coming out can be terrifying.”

In her opinion, the best way to understand something that seems foreign or, in her own words, “alien” is to do the appropriate research.

“Learn about it. First things first, know what you’re talking about. You have to educate yourself on what you’re actually saying. I think that’s the first step,” Harford says. “I can’t ask people to accept it if they are unwilling. I can’t ask people to force themselves to be comfortable in that situation. You can’t force natural acceptance. What I can ask is that you educate yourself. There is no such thing as a stupid question.”

Hearkening back to the talk at the coffeehouse, a large topic of discussion was the point that building up a group of allies seeking to promote an end to discrimination is vital to creating a sense of safety on campus.

“An ally isn’t just a friend,” Hartford says. “You can be a friend to somebody but that doesn’t make you their ally. Being an ally is not a passive thing. It’s an active thing. If you hear somebody talking about whatever marginalized group you are allied with or saying something that isn’t true, it is important to say something. There needs to be a conscious, active effort.”

Harford expressed that having more allies on campus, those willing to stand up for groups at risk of being harmed by expressing who they really are, is one of the best ways to promote a healthy environment for all people, regardless of sexuality, race, or religion.

“A lot of people here are afraid,” says Scaramucci. “That’s what is so important about allies.”