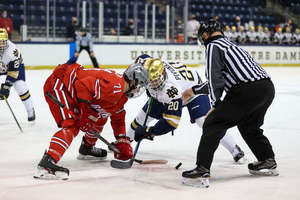 The Notre Dame hockey team soared in its recent games against Ohio State. The series against the Buckeyes marked a bright spot on the schedule after the Irish dropped a series to Michigan and split a series with Penn State. The team won its second game against Penn State after a close loss the night before, despite 34 saves from goalie Dylan St. Cyr.

Opening with a rather frustrating first period during the second game, the Irish did not lose ground to the Nittany Lions. Although the Irish did not take advantage of the only power play opportunity of the game, junior forward Alex Steeves managed to tie up the game during the second period. Both teams scored a second goal during the third period, bringing the game to overtime. Four minutes into overtime, junior defenseman Spencer Stastney skated end-to-end and broke the tie with a fake to score down low. With this goal, Stastney scored his first game-winning goal of the season.

Notre Dame then headed to Columbus to face Ohio State, ultimately crushing the Buckeyes in both games,  6-1 and 8-1, with impressive plays in the first period of the first game. During the second period of the matchup, Notre Dame scored four goals and extended their lead, maintaining dominance on the ice. St. Cyr saved 23 of 24 shots for the Irish, and brothers Alex and Matt Steeves scored in the same game for the first time in their Irish careers.

In the second game, the Irish again dominated the Value City Arena. Many players on the team had an impressive performance. Both Stastney and sophomore forward Jesse Lansdell posted their first multi-point game of the season. Stastney also has a three-game goal-scoring streak.

Notre Dame’s performance on the road has been constantly improving this season, with a 16-for-16 penalty kill and a record of 7-1-0 as of the end of the second game against Ohio State. Moreover, offense on the road has been much better than at home — especially the power play, which the Irish have been converting at 35% on the road, compared to 16.1% for the entire season.

Following the Ohio State series, the Irish lost to Minnesota by a score of 3-0 in both games of the series. The losses come a month after Notre Dame swept the then-No. 1 Golden Gophers. The Irish subsequently dropped their first game of the series to Wisconsin, then tied the Badgers in the second. With two series left in the regular season, Notre Dame sits in a tie for third in the Big Ten standings. They face Michigan State on the road before hosting Penn State in early March. The Irish will then host the entire Big Ten tournament on March 18-20, with a championship prize of an automatic berth to the NCAA tournament.