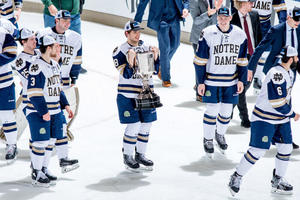 With a record of 27-9-2, the 2017-2018 Notre Dame men’s hockey season may be the most commendable in the Jeff Jackson era. Head coach Jeff Jackson led the Fighting Irish back to the Frozen Four for the second consecutive season. The Irish won not only the Big Ten regular season and tournament championships, but also secured the No. 1 seed in the East Region in the NCAA Tournament.

Starting the season with a 5-3 win against Alabama Huntsville, the Fighting Irish set the tone looking forward to the Big Ten conference and what would become the rest of the season. From Oct. 27, 2017 to Jan. 19, 2018, Notre Dame hockey enjoyed a program-record 16 consecutive wins – propelling them to the top of the NCAA rankings. This season was the first year Notre Dame was in the Big Ten Conference, and they certainly made their presence known. Throughout conference play, Notre Dame went head to head with some of the nation’s top hockey programs, including Ohio State, Penn State, Minnesota and perhaps most notably Michigan. With a win over Michigan State in the regular-season finale, Notre Dame retained its ranking as the No. 1 team in the nation according to USA Today/USA Hockey Magazine.

Notre Dame’s historically successful season was due largely to the strong play of senior center and team captain Jake Evans, as well as sophomore goalkeeper and Hobey Baker Top 10 Finalist Cale Morris. Evans, who leads all players in the 2018 Frozen Four in career points (138), is also one of 15 players in the nation with at least 30 assists in the season. After his impressive regular season, the senior seems primed to play at the next level; in 2014, the Montreal Canadiens selected Evans in the seventh round and currently retain his rights. On the other side of the net for the Irish, Cale Morris led the nation with a .945 save percentage. In addition to their winnings, six Irish hockey players were named 2017-18 Winter Academic All-Big Ten honorees, and Matt Hellickson was drafted to play in the NHL this year – adding to the five others already drafted on the team.

With the Irish tallying 30 goals and over 200 more saves than their opponents over the course of the season, it is no surprise that Notre Dame hockey is a national powerhouse. The Frozen Four took place on April 5th at the Xcel Energy Center in Saint Paul, Minnesota, where Notre Dame took on the Michigan Wolverines. In typical Notre Dame fashion, the game came down to the last few seconds when Jake Evans finished off an incredible play to set up a championship showdown with Minnesota-Duluth two days later. The Bulldogs jumped out to a 2-0 lead, and the Irish fell one goal short. Despite the unfortunate conclusion to the game, the Fighting Irish lived up to their name, ending an incredible season as the national runner-up and setting the stage for an even brighter outlook in the coming years.