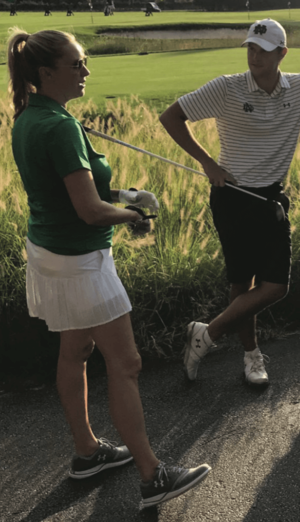 Fall play is well underway at the Warren Golf Course, with the men’s golf team posting competitive team scores in all three tournaments they have played to date. While 2018-19 play started off a bit rocky — with a handful of fifth and eighth place finishes in the fall — the Irish have asserted their competitive edge in the 2019-20 pre-season with two first place and one third place finish.

They kicked off competitive play with a trip to Madison, Wisconsin, where they handily defeated higher-ranked Kansas and Ole Miss — the second and third place finishers, respectively. They posted a score of 22 under par, 14 strokes better than the Jayhawks, who finished eight under par. Their first place finish in the Badger Invitational was a large improvement from their 20 over-par, eighth place finish at the start of the 2018-19 season.

The Irish carried their momentum into their second tournament, the Windon Memorial Classic, upsetting higher-ranked Ole Miss and Kansas for the second time in two weeks. Senior Hunter Ostrom has leveraged his experience to achieve top ten finishes in all three tournaments the team has played in thus far, already surpassing his number of top-10 finishes from last season. Following closely behind are senior Davis Lamb and freshman Palmer Jackson, with one top-10 finish apiece.

The Fighting Irish look forward to having the home-field advantage in their upcoming tournament at the Warren Golf Course on Oct. 7 and 8. They will be looking to top their 14 under par, fifth place finish on the 7,020 yard, par 71 course. From there, the team will travel to Vero Beach, Florida to play in the Quail Valley Intercollegiate. These two tournaments will conclude their 2019 tournament play and set the tone for the coming months of practice leading up to their spring play. The 2020 season culminates in the ACC championship, in which the Irish will strive to top their eleventh place (+5) finish last season and secure a spot in the NCAA regional tournament, which they were unable to achieve last season.

The Irish and coach John Handrigan will continue to count on senior Hunter Ostrom to lead the team to success. In addition to three top-10 finishes in the three tournaments the Irish have participated in this season, Ostrom had great success this past summer, winning four championships and earning a spot in the U.S. Amateur. In fact, three of Notre Dame’s nine players qualified for the Amateur: Hunter Ostrom, Davis Chatfield and Palmer Jackson. The three players traveled to Pinehurst, North Carolina in mid-August to compete against amateur top golfers from around the world. There, Palmer Jackson found the greatest success, making it through three rounds of match play before falling to senior John Augenstein of Vanderbilt University.

The Fighting Irish have high hopes for the coming season and expectations of greater success than seasons past. If they continue to play with the same tenacity present in their first three tournaments, the team should be poised to achieve their goal.