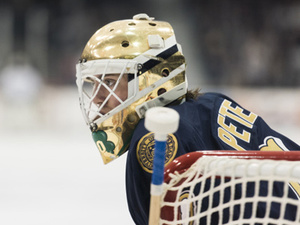 As the Hockey East Tournament quickly approaches, teams are vying for the coveted top four spots and a first round bye into the quarterfinals as well as the 2016 regular season championship.

In 2015, Notre Dame’s postseason dreams were short-lived. Entering the Hockey East conference tournament ranked fifth, the Irish just missed the promise of a bye. While they defeated UMass at home in the first round series, which included the longest game in college hockey history (five overtimes, 151:42 minutes of play), the Irish fell to UMass Lowell 6-4 in a deciding Game Three on the road, ending their season.

But this year, things are different.

The seventh-ranked Irish are currently third in Hockey East (18-7-7, 14-4-2 HEA) with only one more weekend of regular-season play.

On Feb. 19-20, the Irish battled it out with fifth-ranked Providence College (23-5-4). With one point in the series, Notre Dame had the opportunity to clinch a top-four seed. Though they put up a fight, the Irish dropped both games to the defending national champions at Schneider Arena.

Despite a pair of losses on the road, the Irish can still finish between first and fifth in Hockey East standings. While all 12 teams in the league will make the playoffs, only the top four seeds will have a first-round bye and the luxury of hosting the second round, best-of-three series.

“Anything is possible with this team; we’ve shown signs this year,” head coach Jeff Jackson said after the loss on Feb. 20. “We just have to do it [for] over 60 minutes.”

“The higher we finish, the better,” Jackson said. “Friday night is the only thing that matters at this point.”

In front of Notre Dame is second-ranked Boston College (23-4-5, 14-1-5 HEA), which has a series against UMass Lowell still to go. On Jan. 29, Boston College shut out the Irish 4-0 at Compton Family Ice Arena, snapping Notre Dame’s 12-game unbeaten streak.

While there is no shortage of energy on a team comprised of 15 underclassmen, inexperience can sometimes show through.

“My concern going into the [BC] game was stressing [the importance of] being emotionally in control because we are a younger group and I think that was a factor,” Jackson said after the BC loss. “We were just too amped up.”

But the Irish have come back to win four of their last six games, proving that they are able to use that loss to fuel their victories.

“That’s what resilient teams do,” senior alternate captain Thomas DiPauli said following the Irish victory over Maine on Feb. 12. “We learned from it. It was good to get us grounded again.”

Sophomore goaltender Cal Petersen has been a driving force behind Notre Dame’s success. He boasts a .925 save percentage over the last 17 games, of which the Irish are 13-1-3. But there’s undoubtedly pressure that comes with being a top team.

“Right now our destiny is in our hands,” Petersen said after the weekend sweep of Maine. “From the beginning, we wanted a championship.”

Sixteen teams compete in the NCAA tournament, with the conference champions receiving an automatic bid. The Irish are hoping to earn a bid after falling short in 2015.

From the start of the season, Notre Dame’s goal has been to return to the Frozen Four, which will be held in Tampa Bay on April 7-9. The Irish’s last appearance came in 2011, when they fell to the eventual national champion Minnesota-Duluth 3-4.

As for now, the Irish are taking it one game at a time.

“We try to stay focused on the next game,” Jackson said. “That’s the mantra around here. The next game’s the most important game.”