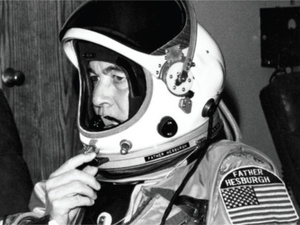 Fr. Hesburgh, a man who influenced countless lives and held company with some of the world’s most powerful people, had one weakness: airplanes.

A self-proclaimed aviation buff, Hesburgh held a lifelong interest in all things pertaining to flight. While he’d wanted to become a priest since the age of six, his goal after that was to become a chaplain on an aircraft carrier. His childhood hobby was building model airplanes, but his fascination really began with his first plane ride. When Hesburgh was 10 years old his father paid five dollars for him to ride in a barnstormer’s stunt plane. “I was hooked for life,” Hesburgh said of the ride in his autobiography.

Hesburgh subsequently logged nearly three million miles in the air, flying in exotic aircrafts such as an F14-Tomcat, a Torpedo Bomber, a Weather Plane and many more. He also broke the sound barrier several times, flew into a volcanic crater and piloted a naval bomber over the Pacific, despite having no formal flight training. But in 1979, Hesburgh fulfilled a lifelong dream — he set an unofficial airspeed record in the world’s fastest airplane, an SR-71 Blackbird.

The SR-71 Blackbird is a high-flying reconnaissance plane that carries no weaponry, but rather photographic equipment used for military intelligence purposes. In 1976, the Blackbird set a world record for airspeed at 2,193 miles per hour.  When he heard about it, Hesburgh was especially intrigued by the aircraft and resolved to try to not only ride in it, but break that record.

His chance came while talking with President Jimmy Carter in the White House. Carter, grateful for Hesburgh’s help with several projects, asked if there was anything he could do for Hesburgh. Hesburgh jumped at his chance. “I happen to be an aviation nut. I’d like to ride in the world’s fastest airplane,” he said.

President Carter, speaking at the March 4th memorial service, recalled the moment Hesburgh asked for the favor: “I said, ‘Fr. Hesburgh, it’s not customary for civilians to ride on a top-secret airplane.’ He said, ‘That’s all right. I thought you were Commander-in-Chief.’”

Two days later, Hesburgh got a call from the Air Force’s chief of staff. He was to report to the Beale Air Force Base in Sacramento to undergo a training regimen and series of rigorous tests. After passing the physical and psychological examinations administered to astronauts, Hesburgh had to learn how to operate every instrument in the back seat: navigational equipment, radios and dozens of gauges and meters. He was then put through situational training for various emergency scenarios including ejection and equipment failure. On February 29, 1979, Hesburgh and the pilot, Major Tom Allison, prepared for their attempt to break the Blackbird’s speed record.

After cruising at 30,000 feet just under the speed of sound, Allison and Hesburgh dove 5,000 feet and broke the sound barrier. They then turned the nose upwards and rocketed past 80,000 feet, accelerating through Mach 3. As Hesburgh watched the speedometer, the Blackbird pushed past 2,200 miles per hour, breaking the plane’s speed record. In his autobiography, Hesburgh said that when he’d landed, he “asked Tom if he had pushed the plane as fast as it would go.” Allison responded, “My God, Padre, I went within five degrees of burning us up. What more do you want?”

This flight remained one of Hesburgh’s proudest moments. At the memorial service, President Carter expressed his satisfaction at setting up the favor. “I’m proud that I was able to do that for him,” Carter said. “He did so much for people everywhere.”