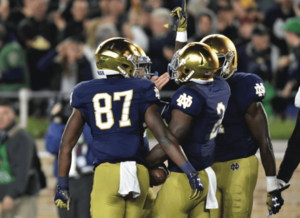 I often joke with people that if you’re around Notre Dame long enough, you realize the only constant is change. One needs only to look as far as the new addition to the stadium that prompted one alumnus back for a reunion last summer to ask an usher where they had moved the stadium (not a joke).

The same can be said for college football itself, which has undergone a facelift in the last half decade with the new College Football Playoff. But for the Irish it brought about a familiar set of questions and doubts from outsiders. Was Notre Dame relevant in these conversations anymore? Why should the Irish receive special treatment in this new system? Why don’t they just join a conference already? The answer to all of these questions in 2018 was just the same as ever.

Win and everything else will become simpler.

Notre Dame did just that en route to a 12-0 regular season record and a berth in the College Football Playoff. As someone who had lived a 12-0 season and BCS title game in the not-too-distant past, the comparisons came quickly and furiously from people who wanted to embrace and debate the connections between the two teams.

Listen, I love a good nostalgia-filled walk through campus to the Grotto while reliving my glory days as much as the next Notre Dame alum. But what I loved more was getting to enjoy and experience this 2018 team as a fan and former player while watching them write a new chapter in Notre Dame’s history that belongs to them and them alone. Because yet again, change is the only constant.

Gone were All-Americans like Quenton Nelson and Mike McGlinchey along with mid-season Heisman candidate Josh Adams. Returning was a stingy defense led by names like Coney, Tranquill, Love and Tillery, and a quarterback competition coming off the heels of an uneven finish to the 2017 campaign.

Senior Brandon Wimbush emerged from camp as the starter yet again and led the Irish to a 3-0 start including a week one win over rival Michigan in front of “College Gameday” and the eyes of the college football nation waiting to see if Notre Dame was “relevant” yet again. After narrow wins over Ball State and Vanderbilt, change reared its head again, when junior quarterback Ian Book took over and the Irish season began to build momentum unseen since 2012.

Marquee wins began mounting. They came in dominating fashion at home against traditional powers like Stanford, with “Enter Sandman” blaring in Blacksburg against Virginia Tech, and against Chicago’s other team on the road against Northwestern. The offense exploded with receivers such as Miles Boykin, Chase Claypool and Chris Finke benefitting from a connection with their new quarterback. The defensive line led by Jerry Tillery, Khalid Kareem and Julian Okwara terrorized opposing quarterbacks and allowed All- American cornerback Julian Love to wreak havoc in the defensive backfield. Notre Dame’s offensive line lost senior captain Alex Bars to injury against the Cardinal, but after reshuffling around veteran center Sam Mustipher, the line did not fail to open holes for senior running back Dexter Williams and the deep Irish backfield.

You really want to know how much has changed? Notre Dame actually rested its starter Ian Book because of injury against unranked Florida State so he would be healthy enough to face off against No. 12 Syracuse at Yankee Stadium in the Bronx. Read that sentence in 2012 and watch heads explode.

Dominant during stretches, resilient in others, Notre Dame found itself in a position that I will concede elicited a major wave of déjà vu: on the road against Southern Cal with a chance to win and secure a spot in the College Football Playoff. I let myself enjoy that win all over again right alongside them.

I can tell you that going undefeated at a place like Notre Dame is an experience that none of these guys will ever forget. The energy that builds around campus each week is hard to explain. The lessons you learn with your teammates while trying to balance the challenges and extra attention that come with success make you better in every way possible. Ultimately, the whole ride and the chance to bring another banner back to the tunnel in Notre Dame Stadium is the closest we all come to giving back even 1/1000th of what Our Lady has given us all.

While the excitement surrounding Notre Dame’s playoff berth gave way to a 30-3 loss to eventual national champion Clemson, it does not diminish yet another change the 2018 team made to the landscape of college football. An independent, non-conference champion has now shown it can bully its way into college football’s most exclusive party. With plenty of familiar faces returning in2019,we plan to make ourselves at home.

Mike Golic Jr., a 2012 Notre Dame graduate with a Bachelor of Arts degree in film, television and theatre, is the host of “First & Last” and a contributing host of “Golic and Wingo” on ESPN Radio. He played 40 games for the Irish as an offensive lineman from 2008 to 2012.