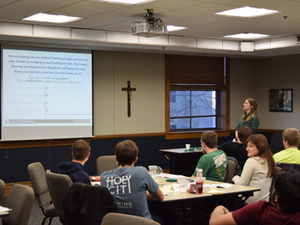 “A cultural shift is necessary.”

These are the words from Christine Caron Gebhardt, co-chair of the Committee for Sexual Assault Prevention (CSAP) and director of the Gender Relations Center (GRC): words that are ever-present in the conversation of how to end power-based violence. This fall, Notre Dame launched a new program that gives people a concrete way of identifying and differentiating between instances that promote a culture of violence and instances that challenge the culture.

“When you talk about the issue of sexual assault … it’s really easy to talk about in the abstract, and it can seem like a problem that’s huge and overwhelming. ‘How do I really target this? How do I really help that much with this problem? I can’t make it go away,’” junior Kelsey Lyons, GRC dorm commissioner, says.

The GreeNDot initiative is designed to prevent various forms of power-based violence by making culture more tangible. A red dot is any specific action, word, decision or value that leads to a culture of violence and bystander inaction. A green dot is any choice, word, conversation or attitude that makes the university safer.

There has been much support for the program across campus, Gebhardt says. Lyons agrees, citing large participation from men’s dorms. After participating in the basic overview training, many choose to take part in bystander training.

On Dec. 5, Notre Dame hosted its second bystander training. The six-hour intensive training teaches campus community members about power-based violence and gives them the skills to intervene in problematic situations in a variety of ways.

By labeling specific instances of green or red dot behavior and by teaching concrete skills, GreeNDot is able to avoid seeing culture change as an insurmountable barrier.

“If we can get people to really put themselves in a situation in their minds where they can envision how they would help other people, that’s really the most important,” Lyons says.