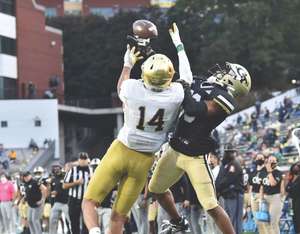 Facing a mediocre 2-5 team with the Clemson matchup on the horizon, No. 4 Notre Dame’s game against Georgia Tech had the markings of a trap game. But in order to stay on track for a playoff berth, the Fighting Irish needed to handle business in Atlanta on Halloween.

The offense hoped to build on a stellar performance against Pitt, where the stagnant passing game erupted as Ian Book threw for over 300 yards and three touchdowns. The defense intended to simply keep doing what they had been the whole season: dominating.

After receiving the opening kickoff, the Irish embarked on a shaky opening possession. Facing four third downs over an arduous 15-play, almost nine-minute drive, they finally scored on a rollout pass from Book to Joe Wilkins, marking his first reception in five games. The defense quickly halted the Yellow Jackets’ first possession, and Notre Dame marched down to the Georgia Tech 13 as the first quarter ended, poised to score again. But on the first play of the second quarter, Kyren Williams fumbled, leading to a 93-yard scoop-and-score for Georgia Tech.

With the score now tied in this presumptive blowout, Notre Dame quickly responded with an efficient four-minute drive capped by a redemptive touchdown from Williams, showing resilience after the disastrous fumble.

While the offense had a sporadic start, the defense remained steady. Clark Lea’s squad allowed just 66 yards of offense in the first half, neutralizing the dual-threat capabilities of Georgia Tech quarterback Jeff Sims. The Irish would score once more in the first half on a Jonathan Doerer field goal. Notre Dame entered the locker room with a 17-7 lead, much closer than expected.

The Yellow Jackets received the ball to start the second half and drove deep into Notre Dame territory, with a 39-yard completion over the middle from Sims energizing the home sideline and the 11,000 fans in attendance. This energy was abruptly halted two plays later after a strip sack by graduate captain Daelin Hayes and a recovery by senior defensive lineman Myron Tagovailoa-Amosa.

The Irish offense capitalized on the turnover, scoring again on Williams’ second rushing touchdown of the day. The quick turn of events had driven all the momentum to the Notre Dame sideline. Sims was sacked three more times in the third quarter, including another strip sack by Hayes — this one was recovered by Georgia Tech. The Yellow Jackets managed to set up a 44-yard field goal attempt late in the quarter, but missed wide right.

Notre Dame took possession and scored at the beginning of the fourth quarter on a short run from C’Bo Flemister, bringing the score to 31-7. But Georgia Tech battled back, scoring on offense for the first time with seven minutes left in the game. Despite failing the two-point conversion, the Yellow Jackets executed a successful onside kick, causing Irish fans’ hearts to skip a few beats. However, the defense held strong, sacking Sims for a fifth time on the final drive, with a potential sixth on yet another sack from Hayes that was overturned but still forced a turnover on downs.

The Irish got the ball back for a final time with five minutes remaining, driving down to the 1-yard line before Flemister was stopped with under a minute left. Coach Kelly gave the offense one last shot to put it in the endzone (a 2-yard loss from Flemister) before letting the final seconds run off.

The 31-13 final score does not reflect how thoroughly the Irish dominated, particularly on the defensive end. Over half of Georgia Tech’s points were scored by their defense, and the lone offensive score for the Yellow Jackets came well into the “garbage time” fourth quarter. Sims was held to just 150 yards passing and two yards rushing. As for Notre Dame’s offense, Book was held to under 200 yards through the air and a single touchdown, but Notre Dame survived the trap game and advanced with an undefeated record, setting up an epic top-four showdown with Clemson.