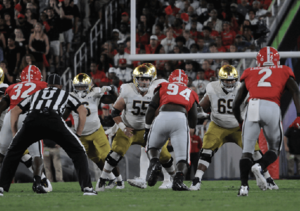 It had all the makings of a revenge game. The No. 7 Notre Dame Fighting Irish would be facing the No. 3 Georgia Bulldogs in a primetime matchup, the first meeting of the two since Notre Dame’s narrow 20-19 loss at home in 2017. Much like that game, this match was expected to have implications for the College Football Playoff.

Notre Dame came up just short against the Bulldogs again, falling by a score of 23-17 and receiving its first defeat of the season in front of a record crowd at Sanford Stadium in Athens, Ga.

The Irish led at halftime, fell behind in the second half and narrowly missed completing a fourth-quarter comeback. Notre Dame Coach Brian Kelly saw both teams play incredibly hard throughout.

“It was a physical game, both sides of the ball,” he said after the game. “You could hear it out there. The physicality was real. Probably one of the most physical games that I’ve coached against any team that I’ve had compete.”

Both defenses held firm in the first quarter, giving up relatively little ground and forcing either a punt or a turnover on downs in each of the game’s first five possessions. The Irish made the first big play of the night on a punt, when senior receiver Chase Claypool recovered a fumble at Georgia’s 8-yard line.

The Irish took advantage of the good field position as senior quarterback Ian Book connected with junior tight end Cole Kmet for a one-yard score on fourth-and-goal. Book completed 29 passes for 275 yards on the night, tossing a pair of touchdowns and two interceptions in the process. Kmet, in his first game back from a broken collarbone, led the team with nine receptions for 108 yards and a touchdown.

“We feel like he’s a difference maker as a player,” Kelly said of Kmet. “He kind of set the tone in the game with the physical run early on. I think he got everybody feeling like this is the way we can play this game and he opens up a lot of things for us.”

The Dawgs struck back on the very next possession, capping a 75-yard drive with a three-yard touchdown rush from junior running back D’Andre Swift. With 2:27 remaining in the half, the score was tied at 7-7.

Notre Dame was able to score again before time expired, driving down to Georgia’s 9-yard line, setting up a successful 27-yard field goal attempt from junior kicker Jonathan Doerer. The Irish were up three at halftime, but the lead did not hold for very long.

The Bulldogs were forced to punt on their first possession of the second half, but they got the ball back on a Book interception on the ensuing drive. Freshman Georgia cornerback Divaad Wilson returned the ball to the Irish 22-yard line. The Notre Dame defense held the Dawgs to a 40-yard field goal, tying the game at 10 with 8:31 remaining in the third quarter.

The Irish went three-and-out on the next possession, and Georgia drove 63 yards and kicked another field goal, taking the 13-10 lead. This was followed by another three-and-out from the Irish.

The Dawgs increased the lead to 10 points on the next possession, when junior quarterback Jake Fromm found senior receiver Lawrence Cager for a 15-yard score after an eight play, 82-yard drive that bled into the beginning of the fourth quarter.

The next Irish possession ended on another Book interception, this time in Georgia territory. The Bulldogs took advantage of the turnover, completing a drive that culminated in senior kicker Rodrigo Blankenship’s third field goal of the night. With just 6:54 left to play, the Irish were down 23-10.

Notre Dame bounced back on the next possession, overcoming two penalties to quickly drive 75 yards, much of it through the air. Claypool snagged a four-yard touchdown pass from Book to bring the Irish within six points of the lead.

The defense helped keep Notre Dame’s comeback hopes alive, forcing a Georgia punt within three plays, giving the Irish the ball 52 yards from the end zone with 1:51 to play. Despite picking up a first down, the Irish drive stalled, and Book’s final pass was batted to the ground by the Georgia defense. Georgia then ran out the clock, securing a 23-17 victory.

The result put Notre Dame’s playoff hopes in jeopardy, but the Irish had played a very close game with one of the strongest college football teams in the country.

“I know, these are some clichés, but when you break it down, our guys fought to the very end,” Kelly said. “We’ve got to coach a little bit better. We’ve got to make a couple more plays. That was really the difference.”