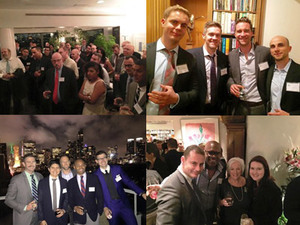 GALA-ND/SMC, the Gay and Lesbian Alumni of Notre Dame and Saint Mary’s College, recently announced a fundraising campaign to finance the first ever scholarship for qualified LGBT students at Notre Dame and Saint Mary’s. Its first fundraising event was held on Nov. 12 in New York and hosted by Phil Donahue, class of 1957, and Marlo Thomas. Over $17,000 was raised at the event, and similar events in other cities across the country are in the group’s plans.

GALA-ND/SMC has been in existence since the early 1990s. According to a Dec. 1 press release provided by GALA National Chair Jack Bergen, class of 1977, GALA seeks to “Promote solidarity and friendship among GLBT [gay, lesbian, bisexual and transgendered] graduates, former students and friends of the University of Notre Dame and Saint Mary’s College; provide financial and moral support to GLBT student groups at Notre Dame and St. Mary’s College which support GALA’s mission; sponsor, direct and participate in activities of any nature including charitable, educational, spiritual and athletic, which further the interests of GLBT alumni/ae and friends of the two schools; facilitate, through education, better communication with University and College officials; and increase the visibility of GLBT alumni/ae at Notre Dame, Saint Mary’s and worldwide.” The alumni group numbers over 1,000 members nationwide.

Thus far, the group has focused on social events as well as connecting with students in any way possible. The group has interacted in various forms with PrismND; have a student member on their board; fund a student dance for LGBT students at Notre Dame and Saint Mary’s every year; send one student each year to Camp Pride, an LGBT leadership camp; have an annual tailgate; and hold a seminar every year at the alumni reunion through what is typically a panel discussion. In the past, it has also partnered with academic departments to hold events on campus.

This past April, the group awarded its first two $2,500 scholarships to Bri O’Brien and Adrienne Whisman, both Saint Mary’s College students. The group wishes to continue with these scholarships, in the form of what it eventually hopes will become an official endowment. According to the press release, “The goal is to increase [The LGBT Student Scholarship Fund] to a minimum of four $2,500 scholarships and to start an endowment ensuring continued funding.”

Though GALA-ND/SMC does routinely coordinate with university bodies and act similarly to various other alumni affinity groups — as opposed to regional alumni clubs — the group has not yet been officially recognized by the university and college.

Originally, according to Bergen, the impetus for creating the group was that “there was a group of LGBT Notre Dame and SMC students who felt that they needed to create a group that was more supportive for the LGBT community.” The present purpose of the group continues with that original mission. “The group is really about member engagement, kind of like any other alumni group that exists whether that be regional groups … or some of the other affinity groups,” Bergen says, “just working with alumni members to continue our appreciation and love for the university and have events and other things that engage members as alumni of Notre Dame and Saint Mary’s.”

The group’s mission thus far has made a difference with students currently here, as well. “To have ‘real adults’ and people off campus, but still linked to me by virtue of shared experiences, both as alum and as members of the LGBTQ community, it validates me in a way,” Adrienne Whisman, one of the scholarship winners, says of GALA-ND/SMC. “It shows that even at these two Catholic institutions, people like me have been coming here and succeeding in their lives. They’re proud of who they are and they offer help to students like them. They really do want to improve the lives of LGBTQ students here at ND and SMC.”