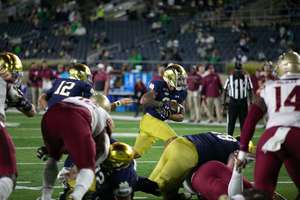 By the time No. 5 Notre Dame received the opening kickoff against Florida State under the lights inside Notre Dame Stadium, it had been three full weeks since the Irish last played.

After not having a positive COVID-19 test within the program for two weeks leading up to the opener against Duke, Notre Dame was without seven players for undisclosed reasons in their matchup against USF. By the Tuesday after the dominant win, Notre Dame had 13 active cases in isolation and 10 players in quarantine due to contact tracing. The September game against Wake Forest was postponed, and USF also paused all of its on-field activities and canceled its game against Florida Atlantic in response.

Notre Dame rescheduled its game against Wake Forest for Dec. 12 and had a bye the week of Oct. 3 as originally scheduled.

A depleted roster and three-week break in play can do a lot to stifle momentum, but the Irish (3-0, 2-0) proved they were capable of winning without their A-game by running all over the Seminoles (1-3, 0-3) and securing a 42-26 victory.

It was Notre Dame’s ninth consecutive win, 21st straight at home and 27th straight win against an unranked opponent, but it didn’t come pretty. At the end of the first quarter, Florida State led 17-14 with third-string quarterback Jordan Travis under center. The Seminoles capitalized on two early Notre Dame turnovers — a Kyren Williams fumble on the second play from scrimmage and a muffed punt from Lawrence Keys III. By game’s end, Travis racked up 96 yards and a touchdown on the ground, and added 204 yards through the air, including a 48-yard touchdown pass to Tamorrian Terry against sixth-year safety Shaun Crawford late in the first quarter that gave FSU their final lead of the game.

The defense struggled in the first half and the game was sloppier than it should have been, but Notre Dame showed they could push through adversity. Clark Lea’s unit was limited in the secondary for the second straight week, as Nick McCloud, Clarence Lewis and Cam Hart were unavailable. The team was also missing senior starting defensive tackle Myron Tagovailoa-Amosa and sophomore linebacker Jack Kiser, the USF game ball recipient. Despite these absences, Notre Dame was up 35-20 at the half and fully in the driver’s seat.

This time around, it was Ian Book and the Irish offense that stepped up when the defense couldn’t. Behind one of the most dominant lines in all of college football — made up of graduate students Liam Eichenberg and Tommy Kraemer, seniors Aaron Banks and Robert Hainsey and junior Jarrett Patterson — Notre Dame rushed for 353 total yards. Kyren Williams went for 185 yards and two scores himself.

Freshman Chris Tyree added 103 yards and a score of his own, and Book rushed for 58 yards and a touchdown. Both Williams and Tyree averaged over nine yards per carry, and Book wasn’t sacked. For the third straight game, the opposing defense had no answer for the Irish run game, but what made the FSU game different for the Irish was the success of the passing game.

Book finished 16 of 25 for 201 yards and two touchdowns through the air and led the offense to 554 total yards and six scores. Freshman tight end Michael Mayer recorded his first career touchdown, and junior wide receiver Braden Lenzy added a touchdown catch of his own after missing time due to a hamstring injury. Highly touted, but rarely seen, junior wide receiver Kevin Austin even got some deep ball targets in his first action in nearly two years. But, it was Javon McKinley who came up with the big catches when they were needed. The graduate student, known primarily for his edge blocking, recorded five receptions for 107 yards, two of which went for 30-plus yards.

No. 5 Notre Dame was far from perfect against Florida State, but it was a more complete and effective team than in the first two games. Clark Lea’s defense had now held opponents to under 30 points in 28 of his 29 games as coordinator, and Ian Book appeared to take the next step with his new receivers.