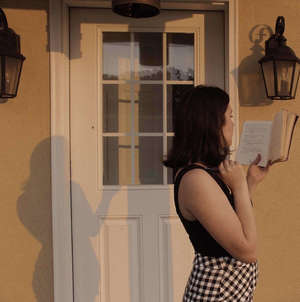 Most students will groan and complain at the thought of writing a five-page essay for a class, let alone an entire novel. But for Ashley Cavuto, writing and storytelling have become a creative outlet to supplement her already daunting load of schoolwork.

Cavuto, a senior majoring in Film, Television and Theater with a minor in Science, Technology and Values, not only manages the usual workload of a Notre Dame student but is also currently in the process of writing her own novel.

“The Dust That Danced” is a thriller that follows a group of students at a Catholic university in the 1990s, and explores several themes surrounding the female experience within this environment. It is set to be released in the spring of 2021.

As a first-time author, Cavuto faces several challenges, especially regarding the publishing process. To publish their work, most authors will send their manuscripts to thousands of different companies and will spend months trying to negotiate contracts. Instead of enduring this tedious process, Cavuto has partnered with The Creator Institute, a ten-month program that pairs her with experienced authors in order to help with brainstorming, draft revision and marketing.

She is currently in the first phase of this program, which requires her to meet weekly with a developmental editor to write the first version of the manuscript. In just a few months, she will begin the next phase, which will involve working with three more editors in order to finalize the novel.

Cavuto will maintain all the rights to her work and will earn 100% of its royalties. In return, she will be in charge of designing and managing her own pre-sale campaign — a process that she is excited to begin.

Cavuto initially began writing at a young age and wrote her first book at just ten years old. According to Cavuto, however, writing is not her only passion and was not something she always thought she would pursue.

“While I ventured through many disciplines and actually found the subjects that I enjoyed most in high school to be math and science, I always seemed to come back to storytelling,” she said. “This manifested through screenwriting, documentary filmmaking, screenwriting once again and finally back to writing a novel as I am now.”

Now, as a senior in college, her passion for storytelling has only grown: last year she served as the president and editor in chief of the online magazine Her Campus Notre Dame, and she is currently an active member of both the Media & Entertainment Industry Club and Hesburgh Library’s Media Corps. Cavuto has been able to diversify her writing skills in areas such as journalism and digital media through these activities.

In regard to her future, the only thing Cavuto is certain about is that she wants to continue to let her imagination run wild. Cavuto explained that one of the reasons that she enjoys working with both film and literature is because there are always opportunities to try something new, which prevents her from ever feeling bored or burnt out. She would like to pursue a career that will allow her to further experiment with storytelling and to explore a variety of creative projects.

As for her advice for aspiring authors, Cavuto admitted that she herself still has a lot to learn about how to balance her work, organize her thoughts and meet deadlines. She explained that reading other pieces has provided her with inspiration for her work and has also been the most effective way to improve her own writing abilities.

She also suggested exploring the “bookstagram” side of Instagram, which is a platform for users to review their favorite reads while also engaging with a community of other aspiring writers.

Finally, Cavuto divulged that the most important point to remember is to be yourself and to be vulnerable with your audience. “It’s really easy to get caught up in thinking about what you believe others will want to read,” she said, “but a story that you don’t care about will be one that others don’t care about either.”