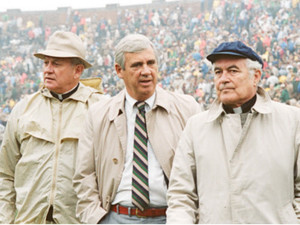 When Fr. Hesburgh was appointed president in 1952, Notre Dame was widely known for its football prowess. Famed coach Frank Leahy had led the Irish to four national championships and had not lost a single game from 1946 to 1949. When reporters came to cover Hesburgh’s appointment, they brought along a football, hoping to capture a picture of the newest president of a “football school.” When they asked him to pose with the pigskin, he refused. In later press conferences, more reporters asked about the famed football team.

“I asked if they wanted to talk about education,” Hesburgh said. When they didn’t, he ended the press conference. From then on, the precedent was set: Hesburgh had started a distinct tradition of the student-athlete experience.

During Hesburgh’s tenure as president of Notre Dame, his right-hand man was none other than Fr. Edmund Joyce, who would be the namesake of the university’s Athletic and Convocation Center. Fr. Ned, as he was affectionately known, also shared a passion for the balance of academics and athletics. The late Mike DeCicco, Notre Dame head fencing coach from 1962 to 1995, told The Observer that Joyce placed a large importance on education for the Irish athletes. “He wanted to make sure they were students first and athletes second,” DeCicco says.

Hesburgh didn’t discount the importance of athletics to the Notre Dame community, however; he embraced them. During his time as president, the athletic department experienced growth unlike it had before. Notre Dame was no longer just a “football school.” One of his most highly regarded achievements was his admittance of women to the university. Missy Conboy, current senior deputy director of athletics and 1982 Notre Dame women’s basketball team captain, says that Hesburgh made this growth possible specifically with the creation of women’s fencing, tennis, basketball, field hockey, swimming and volleyball teams, as well as the creation of athletic scholarships for women.

According to Conboy, Hesburgh also set the high standard for football and men’s basketball that Notre Dame continues to hold today. “Hesburgh’s commitment to equity was the impetus for today’s broad based program that now fields 26 intercollegiate sports (13 for each gender),” Conboy says.

According to Conboy, while football and men’s basketball were Notre Dame’s most popular sports, the leadership of Hesburgh and Joyce allowed for the growth and travel of other athletic teams. “Many of the other men’s and women’s programs participated more regionally as conservative budgets allowed for only minimal scholarships and travel,” Conboy says. The work of both men to grow Notre Dame athletics in that time paved the way for expansion over the years, especially as the endowment and university budget increased substantially both during and after Hesburgh’s presidency.

During the press conference after Joyce’s passing in 2004, Hesburgh discussed the process for building the two new structures that would later bear both their names: the Hesburgh Library and the Joyce Athletic and Convocation Center (JACC). Both men made sure more funds were used for the Hesburgh Library than the JACC. This endeavor was symbolic of the way both viewed the purpose of not only athletics and academcis by themselves but the purpsoe of the university as a whole.

In an essay he wrote for Scholatic’s 1966 football review issue, Hesburgh placed athletics in the scheme not only of Notre Dame but also of human victories as a whole.

“The display, the spectacle, the color, the excitement lingers only in memory. But the spirit, the will to excel and the will to win perdure. These human qualities are larger and much more important than the passing events that occasion them, just as the ebb and flow of all our daily efforts add up to something greater ... a person who grows, who understands, who really lives, who does not merely survive, but who prevails for a larger, more meaningful victory in time and, hopefully, in eternity as well,” Hesburgh wrote in the essay. Hesburgh saw athletics as yet another way Notre Dame would prepare its own not only for the professional world, but also for the lives that lay ahead of them.