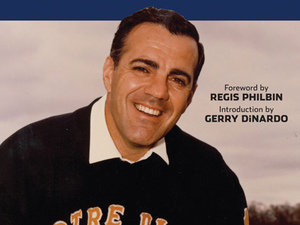 A KNIGHT'S TALE Frank Pomarico recounts his years playing under Ara Parseghian in his new book.

“I have compared playing for Ara Parseghian at Notre Dame to Camelot under King Arthur, a place of high ideals and purpose. The difference is that Camelot is a myth. The Era of Ara was real, with a leader who challenged us to strive for important goals on the field and in life. As one of Ara’s Knights, I am forever grateful to have had the chance to be part of it.”

So writes Frank Pomarico at the conclusion of his stirring 250-page memoir on legendary Notre Dame football coach Ara Parseghian. The book, published in Sept. 2015, is entitled, “Ara’s Knights: Ara Parseghian and the Golden Era of Notre Dame Football.”

Pomarico started for three seasons as an offensive lineman for Parseghian from 1970 to 1973. He uses this insider perspective, as well as interviews from dozens of former players and coaches, to give readers a fresh look inside some of the best years Notre Dame football has ever seen.

“I had been wanting to do this for a long time,” Pomarico says. “I really admired Ara Parseghian. He was a tremendous leader, and he was so charismatic. I thought people should know more about this guy from the people who played for him.”

Notre Dame hired Parseghian in 1964 during a period of football futility, when it had not posted a winning record in five straight seasons. Parseghian turned the program around in impressive fashion, coming close to winning a national championship in his first season. Over his 11 seasons with Notre Dame, he never had a losing season, won two national championships and finished with the third-most wins in Notre Dame history, with an overall record of 95-17-4.

Pomarico was galvanized to finally write the book after he underwent nine hours of surgery to repair an aneurism in his chest. After the successful operation, he called veteran reporter Ray Serafin (Notre Dame class of ‘70), who agreed to help Pomarico put the book together.

John Dampeer, a 1972 Notre Dame graduate who played alongside Pomarico on the offensive line, wasn’t surprised when Pomarico approached him for interviews for the book.

“Frank was a very intense player and [is] a very enthusiastic guy,” Dampeer says. “I read the book, and I liked it. Ara is a remarkable man and coach, and the book does a great job of telling the story of his leadership.”

The book is composed of 18 chapters. Four of them are committed to short recaps of each game in the 1970 through 1973 seasons, and the final chapter covers Notre Dame’s memorable national championship victory over Alabama in the 1973 Sugar Bowl.

In the other chapters, Pomarico uses his experience and input from dozens of other players and coaches to describe life at Notre Dame and detail Parseghian’s leadership. Pomarico and Serafin interviewed players ranging from legendary quarterback Joe Theismann to scout team players that never saw the field.

“What we started finding out, is that all the guys, no matter how famous they were or how little they played, had the same view of Ara Parseghian,” Pomarico says. “This guy was fair. He was loyal to everybody, and we in turn were loyal to him. He [is] disciplined in his life in everything that he [does], and he had a tremendous amount of pride that he instilled in us by his hard work and his organization.”

A quick look to Brian Kelly on the sidelines these past few seasons would support the popularly held opinion that coaching football at Notre Dame is a stressful, demanding endeavor. But Pomarico recalls Parseghian saying that that wasn’t the case.

“It’s easy to coach football. It’s not easy to coach people,” Parseghian told him.  “Once you can get into a person’s mind about doing the right things and making a difference in the world, coaching football is easy. We were always looking for guys that were hungry to be successful, so coaching football was an easy thing to do at Notre Dame.”

Parseghian’s mind is as sharp as ever at the age of 93, and it’s obvious that his coaching still impacts the people who played for him. Pomarico hopes that through this book, Parseghian’s coaching will continue to instill in young people the discipline, pride and integrity that he brought to Notre Dame.

This excerpt from Ara’s Knights: Ara Parseghian and the Golden Era of Notre Dame Football is published with the permission of Triumph Books.  For more information and to order a copy, please visit www.triumphbooks.com/ArasKnights.