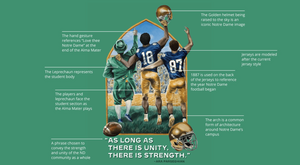 When your parents walk you into the bookstore in August to purchase “The Shirt” for football season, where does their money go?

Many in the tri-campus community know that The Shirt began as a student fundraiser in 1990 and quickly became an annual tradition. It’s hard to miss: The student section shimmers with each season’s shade of green or blue for the first few home football games.

Many students probably also know that half of The Shirt’s proceeds go to a student charity that helps financially burdened students pay for unexpected medical bills.

What few really understand, however, is how those bills get paid. A left-leaning political student club on campus, Solidarity ND, wants to change that.

The board that approves or denies student applications to The Shirt Charity is the Financial Management Board (FMB), headed by Student Union Treasurer Meenu Selvan and consisting of “the controllers/treasurers from Executive Cabinet, SUB, HPC, CCC, and the four Class Councils,” as well as “the Off-Campus President and Judicial Council President,” according to the Student Government website.

As the body responsible for disbursing student funds, FMB represents all sorts of student organizations as dictated by the Constitution of the Undergraduate Student Body of the University of Notre Dame du Lac.

Solidarity ND’s issue with the board, however, is who they fail to represent.

The club is taking action this semester to raise awareness about the process, which they see as “undemocratic.”

Selvan, on the other hand, said that student control of the funds helps maintain a level of transparency, though she acknowledged the shortcomings of the current system.

The arguments on both sides shed light on the huge responsibility that the FMB assumes as the arbiters of The Shirt funds.

Where does all this money come from?

The revenue generated by The Shirt each year goes to one of two places: Half is set aside for student groups, and half goes to The Shirt Charity. The Shirt Charity itself gets a maximum of $300,000 each fiscal year for paying student medical bills; they invest any remainder of their share in the charity’s endowment (creatively named The Shirt Charity Endowment).

According to Article XVI, Section 10 of the Notre Dame constitution, the beginning fiscal year balance of The Shirt Charity funds shouldn’t dip below $100,000, giving the FMB between $100,000 and $300,000 to work with each year as they consider applications to the Charity.

Selvan said that as applications come in, a faculty advisor strips them of all identifiers, including names and class years. Once anonymous, they proceed to the FMB for a decision.

According to their official Notre Dame website, The Shirt Charity “supports Notre Dame students who suffer from extraordinary medical conditions that require payment beyond their means.” The website does not outline how those students are chosen, or, more specifically, who does the choosing.

Some members of the FMB are, in fact, directly-elected officials, contrary to Zheng’s claim. The off-campus president, for example, is an elected position. But most members end up there by just applying to be their organization’s treasurer, as in the case of the Student Union Board, for example. The SUB treasurer sits on the FMB and helps make Shirt Charity decisions but was not elected by students.

Selvan herself, the student union treasurer, received her position by appointment.

It is also true that the FMB has no medical advisor or any non-student oversight, as they approve or deny applications to The Shirt Charity. Selvan said that The Shirt was a venture created by students focused on helping students, and so the years-old philosophy has been that students should be the ones managing it.

“The decision to create the endowment and The Shirt Fund was started by students, it's always remained in the hands of students,” she said. “If students were to lose oversight of The Shirt, how would that make students feel? That's something that Allan [Njomo, student body president,] and I have to address.”

“That's where details are really helpful because we are not medical experts,” she said. “But if we could see that the student is struggling, or that the symptoms of such issues have had an immense impact on their life, on their experiences as a student here at Notre Dame, then it's more likely going to be passed.”

Zheng and Solidarity ND’s third issue, the exclusion of graduate students from FMB’s application process, has more to do with how student activities are funded.

The FMB, in addition to managing proceeds from The Shirt, controls the allocation of student activity fees that all undergraduates pay — the $95 per year folded into undergraduate tuition. Different graduate students pay different amounts, and according to FMB faculty advisor Peggy Hnatusko, this money is not managed by the all-undergraduate FMB.

Therefore, Hnatusko wrote in an email, “Post-baccalaureate students don't pay into this fee (nor absorb any loss that might incur if The Shirt Project doesn't make their revenue) so they don't have membership on FMB.”

So although graduate students may apply to have medical bills reimbursed by The Shirt Charity, they may not sit on the FMB and arbitrate applications because they’re not allowed to control undergraduate funds.

Where do we go from here?

Selvan admits that the subjectivity of The Shirt Charity decisions can be frustrating. There is no guarantee of consistency across years.

“Maybe last year's board would approve expenses related to dental care, whereas this year's board may not,” she said.

But she said a process completely controlled by undergraduates affords students a certain level of visibility. They know that their peers control this money, rather than a name without a face.

“The whole idea is that it's students overseeing the affairs of students,” she said.

According to Zheng, Solidarity ND hopes to improve the selection process of an otherwise admirable initiative.

“This charity thing is a really good example of this principle of mutual aid, where everyone tries to pitch in and help other people in the community,” Zheng said. “I think it can be judged with fairer and simply better criteria than it has in the past.”

He said that the first step for his group — opening up a dialogue — has already begun.

“We've established a working group with members of student government, with members from our own team, and we're starting to talk about more concrete details,” he said.

Both Zheng and Selvan said they hope to move forward with the same aim in mind: the best possible process for Notre Dame students.