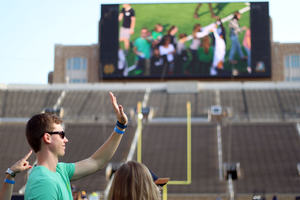 It was a weekend evening in late August, and the music of “Rudy” boomed out from the stadium, extending over what seemed like the majority of campus as the sun set and South Quad was set up for the university’s 175th anniversary celebrations.

The occasion was not the home opener, but instead “Flick on the Field,” an event put on by student government on Friday, Aug. 25. Just over one week before the official beginning of the Fighting Irish’s 2017 football season, thousands of students and area residents brought blankets and sweatshirts and filled the remodeled stadium, where they saw the newest physical changes to the football program while watching an old classic.

According to Tim O’Connell and Caitlin Murphy — the co-directors of student life within student government who spearheaded the event — over 3,500 student wristbands were handed out. Roughly 1,000 community members also attended (though that count is unofficial).

It was another event heralding the new Duncan Student Center, which will officially open to students in January 2018.

That precedent is something that O’Connell and Murphy hope to see in the future: the continuation of “big events for students, run by students, in the stadium,” according to O’Connell. Complemented by events such as the Fall Career Fair and Activities Night, which also occured in the stadium, as well as an official class photo for the Class of 2021 taken on the field, the student programming accessiblity within the stadium appears promising.

As for “Rudy” itself, Murphy has a simple explanation for its part in the event and the heralding it still earns on campus: “The movie makes you feel proud to be part of Notre Dame.”

One week later, the real-life, current version of the Notre Dame football team also made its student body — this time in the stands instead of on the field — proud.