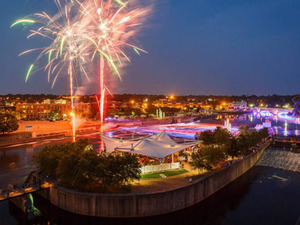 Every first Friday evening of the month, downtown South Bend bustles with activity as community residents and visitors alike get a taste of all the local area has to offer.

Aptly named First Fridays, this event boasts attractions for people of every age. Live musical performances, special one-night promotions, complimentary refreshments and free demonstrations and classes are only a few of the many activities that occur.

South Bend First Fridays began in May 2009 after a small committee of business owners gathered to highlight all the possibilities for dining, entertainment, art and shopping in downtown South Bend. It is a chance for businesses to show off what they do best, as well as an opportunity for the public to take advantage of several activities and promotions taking place in the area. Currently about 50 local businesses participate, and new events are added to the schedule each month.

“First Fridays has definitely grown, with more businesses being added each year,” Kylie Carter, events coordinator for downtown South Bend, says. “Nonprofits will collaborate with downtown businesses to provide some kind of activity … which in turn helps the nonprofit get the word out about their mission. The more [participants] involved in each First Fridays, the more energy and vibrancy that is infused into the event.”

February’s First Friday event focused on the month of love by encouraging area residents to show their love for South Bend. Many participants attached “Love Locks” on the East Bank wall of the St. Joseph river, imitating the popular Paris practice. Some of the businesses that took part included Purple Porch Co-Op, the South Bend Chocolate Factory and The Pigeon and The Hen ceramics studio.

The theme for March’s First Friday event is “Think Green,” in honor of both St. Patrick’s Day and local “green” initiatives happening in downtown South Bend. Carter says the public can count on lots of free live music at various locations, including LaSalle Kitchen & Tavern and Chicory Café, and free coffee tastings from Zen Café.

April’s theme will be “Downtown Renaissance,” which will not only encourage Renaissance Fest attire, but also celebrate the renaissance currently taking place in downtown South Bend.

May’s theme of “Vintage Downtown” will inspire many residents to don retro attire from past decades. The event will also feature a classic car show with members of The Wheelman, an antique bicycle club, showcasing their historic bikes.

“Beyond First Fridays, there is always something going on downtown every night of the week,” Carter says. “There’s karaoke, live trivia, game nights, jam sessions, dance lessons and much more … I was an undergrad at Notre Dame, and sadly I never left ‘the bubble’ … I know that students are busy and there’s a whole self-contained world on campus … but it’s good to get outside once in a while to broaden your sense of the world and to gain new perspective and experiences.”

Maggie Skoch, a resident assistant in Breen-Phillips Hall, has been to three First Friday events and recently took her section to February’s events.

“Going to events in the South Bend community is great to broaden your horizons, to explore what is nearby,” Skoch says. “It really helps students realize that we aren’t a separate entity from South Bend; we’re a part of that community and they’re a part of ours. You have four years here, and I just wish I would’ve ventured out into the community sooner because I love what’s there.”

All activities, entertainment and promotions can be found on the downtown South Bend website, as well as on Facebook.