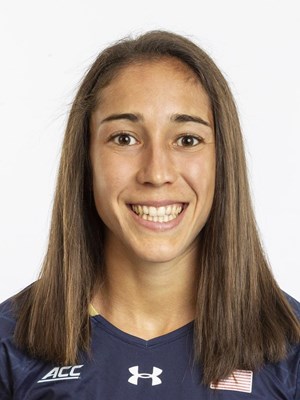 Sabrina Flores has been an indispensable member of the Notre Dame women’s soccer team since her first days on campus. Now a senior and one of three team captains, she sees the makings of a remarkable season ahead.

Although an exceptional individual player — she participated in the 2016 FIFA U20 Women’s World Cup for the United States — Flores is notable for her fierce loyalty to her teammates and her commitment to forming a tight-knit team. She has grown up maintaining family ... literally. All her life, Flores and her twin sister, Monica, have played side by side, a bond Sabrina Flores describes as “the best thing in the world.” Both were recruited by Notre Dame, a school Flores was attracted to due to the emphasis on both strong academics and strong athletics. She has since fallen in love with the culture of the university’s women’s soccer program. Flores deeply values the relationships she has formed with her teammates and loves the team’s shared passion.

This year, as a team captain, Flores is committed to strengthening the community bonds that have defined her experience as a player. “Grateful and honored” to have been chosen to help lead the team this year, Flores emphasizes that she is part of a team of leaders. Everyone, from freshmen to seniors, is a leader who helps to hold the team accountable. “Good leadership comes from every- one on the team. Everyone has stepped up and contributed,” she said.

Maintaining a good team atmosphere is among her primary goals for the sea- son. “I really want to create such a great environment for this team that people love what they do and we get the results we deserve to get,” Flores said. “It would be amazing to share that joy, that passion and simultaneously reach the goals we know we’re capable of. That would be the ultimate reward, to help everyone reach their potential.”

Flores is excited by the team’s potential this season. Although the team has been disappointed by a few losses early in the season, she believes the Irish will make a strong showing in 2018. “We’re excited to see what our full potential is, and really execute it,” she said. “We’ve trained. We know what we want to be, and we’re ready for the moment when we’ll execute what we’ve been working towards. That’s exciting because it pushes people to not settle for mediocrity. We know how good we can be.”

Sabrina Flores has shaped the character of the Notre Dame women’s soccer program and contributed significantly to the team’s triumphs. As she competes in her final season with the Irish and considers her next steps, it seems certain that her success will extend well beyond her years under the Dome.