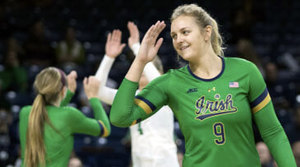 Last year, Irish volleyball player Rebecca Nunge was called the team’s “Swiss Army knife” because of her versatility on the court. This year, Nunge has been more of a rifle, leading the Notre Dame offense from her outside hitter position.

For her efficient efforts at the Bowling Green/ Toledo Invitational, Nunge was named most valuable player of the tournament. She collected 29 kills on 63 attempts — against only two errors — for a hitting percentage of .429. She added eight blocks in Notre Dame’s wins over Bowling Green, VCU and Toledo. Jemma Yeadon and Natalie Johnson also earned All-Tournament team honors for the Irish.

A 6-foot-2 junior from Newburgh, Ind., Nunge graduated from high school early to enroll at Notre Dame and join the volleyball program in the spring of 2015. She’s played in every match since, including taking on the setter’s role for a few matches last year.

This year, the Irish got off to its best start in a decade, winning its own Golden Dome Invitational in addition to the BGSU/Toledo Invitational. The well-rounded Notre Dame offense was led early on by Nunge and Yeadon, with sets from senior Caroline Holt. The solid early-season defense is led by veterans Sam Fry at the net, and Ryann DeJarld and Sydney Kuhn doing the digging.

Nunge’s early-season success was predicted by Notre Dame head coach Jim McLaughlin. Prior to the season, he said, “I have huge expectations for Rebecca and I think the deal is that she’s coming into practice with a level of expectation every day that is greater than before. She has really matured as a volleyball player. She is learning better, working harder in terms of being more mindful on each rep and is prioritizing the task list better.”

Nunge and her teammates are aiming for a successful follow-up to the 2016-17 season, in which the Irish built a winning record (22-10). The Irish were picked to finish fourth in the ACC preseason standings, but a 6-1 start to the season has vaulted Notre Dame into the conversation as one of the conference’s top teams.