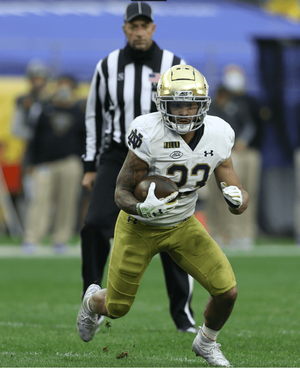 Kyren Williams’ journey to being named the ACC Rookie of the Year didn’t come easily. Redshirted as a freshman and facing a pandemic as a sophomore made his position within the running back room an uncertainty at the start of the season.

But Williams was up for the challenge.

“All I did was work,” he said in a Dec. 12 press conference. “I came out this season full force — ready to go. It boosted our team chemistry because the running back position was kind of skeptical this year, not knowing who was going to be our running back.”

Williams finished the season with 13 touchdowns, 316 receiving yards and 1,125 rushing yards, making him one of the top 10 rushers in the ACC.

Part of what made him an invaluable addition to the team was his ability to protect quarterback Ian Book.

“He’s picking up blocks on my blind side that I can’t even see,” Book said about Williams in a Dec. 17 press conference before the ACC Championship. “They’ve got linebackers running 100 miles an hour, and he’s sticking his head in there. And that’s what it’s about. Those aren’t the glamorous plays that he’ll get credit for, but he should, because blocking as a running back is very difficult.”

Williams had a lot of pressure on him to perform well, as he ran behind a powerful offensive line that returned all of its starters. The unit ended the season as a Joe Moore Award Finalist.

Williams attributed their success partly to the bond between them.

“I trust any man who is on that O-line,” he said. “I know they are going to do whatever they’ve got to do to get the job done.”

As Notre Dame is saying goodbye to four of its offensive linemen, Williams will have to work to form that same bond with a younger group next season.

Williams acknowledged the task ahead of him: “We’re ready for what’s ahead of us and ready to take it on with new leadership,” he said after the Rose Bowl.

Thankfully, Notre Dame has secured big names to bolster its future offensive lines in this year’s recruiting class. Prime candidates to compete for playing time next season on the 2021 offensive line are Blake Fisher and Rocco Spindler, the No. 25 and No. 64 players nationally, respectively, according to ESPN.

The way that Williams stepped up this season leaves little doubt that he’ll be a powerful leader for the new recruits. “We know what we have to do,” he said after the loss to Alabama. “We know the work starts tomorrow.”