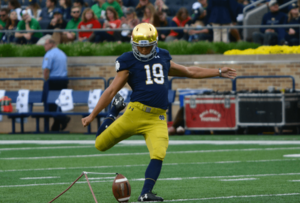 Senior kicker Justin Yoon has made an unequivocal impact on Notre Dame’s football program since the start of his career back in 2015.

Then a freshman, Yoon was successful, a recognizably valuable player in his first season at Notre Dame. Before the start of his career, Yoon was ranked the No. 1 and No. 2 kicker in the nation by 247Sports and ESPN, respectively. His freshman season was arguably his best, converting 15 of 17 field goal attempts (88.2 percent) with a career long of 52 yards against Navy. Yoon has also been Notre Dame’s primary kicker every game of his college career, except the Navy game this past season because of an injury.

One of the records that Yoon broke this season cemented him as the all-time leading scorer in Notre Dame history with a total of 364 career points. This far surpasses the prior leading record holder, running back Allen Pinkett, who had a total of 320 career points. Yoon secured this astounding accomplishment with a field goal and six PATs in this season’s game against then-No. 24 Virginia Tech in Blacksburg.

Yoon also broke the record for career field goals made, totaling 58 during his college career. This was just one more than Kyle Brindza, the previous record holderm, who graduated in 2014.

Along with the records he broke and the award he received, Justin was 16 for 20 (80 percent) on field goals attempts this season and made a season-long kick of 48 yards during this year’s opening game against Michigan on Sept. 1.

As the season comes to a close, we realize that it won’t be the same without the eruption of the whole student section, cheering of his last name “Yooon” whenever the Irish attempt a field goal. Even though his four-year football career has concluded, his name will surely live on in the records he has set and the legacy he has left behind.