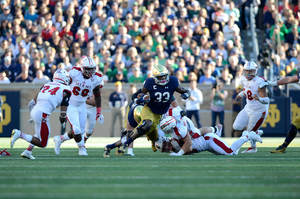 Junior Josh Adams, football team captain and running back, had a strong season, earning him spots in the Notre Dame football record books. Through the first seven weeks of the seasons, he even entered his name into the Heisman Trophy conversation. 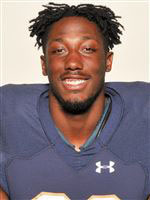 This year, Adams became the first player in Notre Dame football’s history to have five games in the same season with at least 150 yards rushing. He also now holds the Notre Dame football record for career runs of at least 50 yards — while the previous record was six runs, Adams now has 13.

The best game of Adams’ season was arguably the Oct. 28 game against North Carolina State, when Adams helped the Irish win 35-14 over the NC State Wolfpack. Adams’ season declined after that game, only playing part of the first quarter in the Nov. 4 game against Wake Forest. His subsequent performances against Miami, Navy and Stanford were also weaker than his initial season start, preventing him from continuing to be a strong candidate for the Heisman Trophy.

Thanks to his great production over three years at Notre Dame, Josh Adams will be a household name for Irish football fans for years to come.