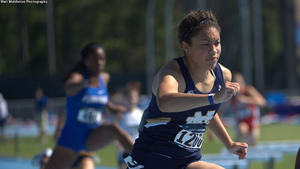 Notre Dame senior sprinter Jordan Shead has been a crucial part of the Fighting Irish track and field team ever since her arrival in 2014. This year, she has continued her success, recently setting a new school record in the 600-meter race at the Notre Dame Invitational. The previous record-holder? Jordan Shead.

Junior year brought more of the same for Shead. She ran the best 400 meter dash time of the year among Irish runners with a time of 54.30 at the ACC Indoor Championship. She even set a personal record in the 400 meter hurdles at the ACC Championship at 58.69 seconds. This time put her sixth in the all-time record books.

Shead’s dominance has not gone unnoticed. She made First Team All- American in 2016 for the outdoor 4x400 meter relay. In 2015, she was named to Second Team All-American and First Team All-ACC in the same event.

In the 2017-2018 season, Shead is off to a hot start. Along with setting a new school record, she also broke her personal record in the 600-meter race, with a time of 1:29.89. At the Indiana Relays this past weekend, she finished fourth in the 400-meter dash.

With the Meyo Invitational around the corner, the team expects big things of Shead. “I think she will do well at the Meyo and put herself pretty high in the conference rankings,” coach Turner said.