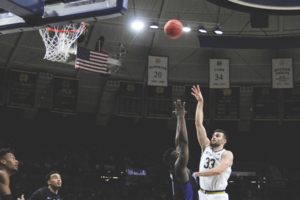 The highlight-reel dunk. The crossover that leaves a defender on his backside and the crowd on its feet.

John Mooney’s game involves neither of these two elements, yet he’s still the shining star in a season of sheer darkness for Notre Dame men’s basketball.

“I just try to do the little things,” Mooney said. “I try to get every rebound, take charges, get on the floor and definitely set screens, just to do whatever it is that I can to help the team.”

Among the elite talents in the Atlantic Coast Conference (ACC), Mooney is quietly putting together a season’s worth of statistics that rival even the league’s best.

As of Feb. 24, Mooney is one of only five major-conference players with at least 16 double-doubles, currently the best mark in the ACC. Duke freshman Zion Williamson — projected as the No. 1 overall pick in this summer’s NBA Draft — has only 10 and sits tied with North Carolina’s Luke Maye as the closest to Mooney among ACC players.

The junior forward has been everything that head coach Mike Brey has needed from the most experienced player healthy enough to suit up. A mentor to coach the freshmen through the transition to college? Mooney is that steady voice. A calming authority to cut through the 10,000 deafening fans in Durham, Chapel Hill and Charlottesville? Mooney is up to the task. What about firing up the Purcell Pavilion crowd while trying desperately to pry a win away from Boston College with the Irish only at six healthy players? Once again, turn to John Mooney.

Brey did just that earlier this season, naming the Orlando, Florida native a captain just nine games into the season. Just two weeks after senior captain and forward Elijah Burns transferred from the program, and two days before senior guard Rex Pflueger’s season would end due to a torn ACL, Brey needed another reliable presence.

He found it in Mooney.

“Coach Brey always tells me and T.J. [Gibbs] that good leaders are always the ones leading in bad times,” Mooney said. “You can never hold your head or anything like that because that trickles down to the rest of the team. So you always have to be positive [and] continue to work hard if you’re not seeing results.”

“I’ve been really proud of Johnny Mooney,” Brey said earlier this season. “He’s been great as a leader and helping the young guys. I’m really thrilled with how he’s been playing, I just think he’s been getting more and more confident.”

Whatever Brey needs, Mooney does it. And he does it well.

That confidence has manifested itself over the course of the season and has continued to grow. Since being tabbed a captain, Mooney has averaged 15.2 points and 11.3 rebounds, while playing over 31 minutes per game.

Despite the Irish’s disappointing season, Mooney’s individual success is reason for optimism that his senior season will help to return Notre Dame to the ranks of the championship contenders. His leadership and reputation, meanwhile, have epitomized the Notre Dame culture that Brey instills and have served to mentor the newest class of freshmen as they develop into impact players for years to come.